I’m going to go on record and predict that the Swift Boat Veterans kerfuffle won’t just be a major negative for Kerry: it will be a campaign-killer.

His rationale is that, if any of these charges stick, it will cement the image in the public mind of Kerry as a stranger to the truth and undermine the war hero shtick that is the lynchpin of his campaign.

The biggest problem for Kerry is that the Swifties’ attacks confirm what we really want to believe about him anyway. He’s been so damned annoying about his Vietnam record that we secretly want to think the worst of him, and now the Swifties have provided a rational basis for that gut-level irritation that Kerry inspires when he blathers on about his war record. This isn’t just bad for Kerry, it’s disasterous: the amorphous negative that normal people have when exposed to Kerry’s “leadership, courage, and sacrifice” / “three purple hearts” mantra now has a core of fact — or at least, alleged fact — around which to crystalize.

Unless Kerry’s campaign manages to completely discredit the Swifties — which seems increasingly unlikely — the campaign is over; Kerry is done. And after Election Day has passed, I expect that anyone looking backwards will wonder why in the world the Democrats ever thought making Kerry’s Vietnam service a centerpiece was a good idea in the first place.

Bear has even established a Swift Boat Tracker to chart Google results for “Kerry swift boat.”

While my initial reaction to totally dismiss the “Swift Boat Veterans for Truth” as “nuts” may have been premature, I still don’t see them as having much direct impact on the campaign. The idea that Kerry’s war medals were unearned is rather dubious and almost impossible to prove. Furthermore, as Bush’s re-election team seems to grasp, the mere fact that Kerry went to Vietnam trumps Bush’s record of halfhearted service in the Air National Guard. And the business about Kerry killing “a lone, fleeing, teenage Viet Cong in a loincloth” is just unbelievable coming 35 years after the fact.

That said, I do believe that Kerry’s actions after returning home from Vietnam will ultimately hurt him more than his Vietnam service helps him. I expect to see several ads focusing on his outrageous accusations against his fellow veterans, including the Senate testimony where he put forth numerous documentable lies. As Steven Taylor has noted, most of the animus of the SBVFT was generated by Kerry’s actions as leader of the Vietnam Veterans Against the War rather than his actual conduct in theater. It seems quite likely to me that this reaction will ultimately take place in other veterans and in the “swing voters” who have yet to make up their minds on Kerry’s character.

Even aside from the things he said about his fellow vets, Kerry has said some rather bizarre things about his own service. For example, he has repeatedly said that he participated in atrocities in Vietnam, which some have used to bolster the claims of SBVFT. If true, this alone would make him unfit to serve as president. It seems far more likely, however, that he in fact not a war criminal but lied about his actions when it served a different political agenda than he’s now pursuing. Less seriously, he threw his/someone else’s medals/ribbons over the White House fence in order to make a political point but then started proudly displaying them in his Senate office when being a war hero served his needs. The most recent such controversy is his assertion that he participated in illegal raids in Cambodia, which is almost certainly false. The combination of these things will quite reasonably bring into question his overall trustworthiness.

Bob Novak correctly observes that the Kerry campaign’s reaction has consisted almost entirely of “ad hominem counterattacks” rather than an actual refutation of the charges, most of them falsifiable.

The book’s strength is the vehemence of testimony by swift boat veterans, alleging that Kerry “gamed” the system to win decorations and later betrayed comrades by charging war crimes. Typical is the quote by Bob Hildreth, commanding an accompanying boat: “I would never want Kerry behind me. I wouldn’t want him in front of me, either. And I sure wouldn’t want him commanding our kids in Iraq and Afghanistan.” Some 200 “Swiftees” on May 4 signed a letter to Kerry demanding full release of his service records.

The book’s weakness is support for Kerry’s presidential campaign by his swift boat crewmates, presumably people who knew him best. O’Neill told me that these former sailors served with Kerry no more than five weeks. Jim Rassmann, now part of the Kerry presidential campaign, was a Special Forces lieutenant spending a few days with Kerry when he fell or was knocked off the swift boat while under fire and was fished out of the Mekong River by the future candidate.

The “band of brothers” was organized by Kerry, according to this book. It tells of a 2003 telephone call to Adm. Roy Hoffmann, who commanded swift boats in Vietnam, telling him he was running for president. Hoffmann, mistakenly thinking it was former Sen. Bob Kerrey, “responded enthusiastically.” Once the admiral realized it was John Kerry, “he declined to give Kerry his support.” Hoffmann is quoted as saying, “I do not believe John Kerry is fit to be commander in chief of the armed forces of the United States.”

As Mark Steyn explains, this idea may well spread because of strategic errors on the part of the Kerry campaign:

[T]he Democrats let their contempt for Mr. Bush run away with them. It wasn’t enough to argue Mr. Kerry’s four months in the Mekong Delta gave him authority on national security issues. Instead, they saw an opening to diminish Mr. Bush, to reduce him from the 21st century commander in chief who had toppled two enemy regimes to the 1970s pampered frat boy with the spotty National Guard record. And so they made the strategic error of hammering on about what their man was doing vs. what the Republicans’ guy was doing during the Vietnam War. And they were having such fun at Mr. Bush’s expense and getting so high on those four months from the 1960s that they gave not a thought to the great wasteland of John Kerry’s 1970s, ’80s and ’90s.

That’s one of the defects of living in the media-political echo chamber, where you’re so hip to the spin and counterspin and counter-counterspin you forget that back on Planet Earth folks don’t look at things that way. On the big speech night in Boston, with Mr. Kerry’s crewmates and triple-amputee Max Cleland and “I’m John Kerry and I’m reporting for duty,” the Dems and the media saw it as an ingenious way of downgrading Mr. Bush. But every normal person that night saw only a strange man with nothing to say about anything that has happened since the early 1970s.

And most Americans don’t want a Vietnam candidate. Vietnam veterans mostly loathe Mr. Kerry for riding the war-what-is-it-good-for-absolutely-nothing movement to celebrity status and, just as they thought they couldn’t despise him any more, here comes the old opportunist riding the I-was-proud-to-do-my-patriotic-duty shtick to the presidency. Older veterans think the endless exhibitionist preening about one’s war record is cheap and vulgar. To everybody else, the Vietnam act is just a bummer, a reminder of a bad time in the national story. Doesn’t matter whether it’s John Kerry in “The Green Berets” or John Kerry in “Apocalypse Now.”

Indeed, this is the great irony of the Kerry campaign. Last week, appearing on the Don Imus radio program, Doris Kearns Goodwin observed that Kerry’s convention speech finally gave Vietnam veterans the respect that they’d long been denied by portraying one of them as a heroic, successful figure rather than the image of baby killers and burnouts that had been created in the popular mind. This would be poetic justice indeed, given that John Kerry played a large part in creating that image. 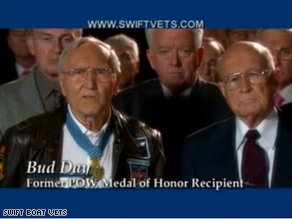