Ketanji Brown Jackson to Be Sworn in Today

Justice Stephen Breyer is retiring today and will swear his former law clerk in his replacement.

NPR (“Ketanji Brown Jackson to be sworn in as first Black woman on the Supreme Court“):

Ketanji Brown Jackson will be sworn in Thursday at noon as the 116th Supreme Court justice and the first Black woman to serve on the high court.

Biden nominated Jackson in February, fulfilling a campaign promise to nominate the first Black woman to the Supreme Court.

“It has taken 232 years and 115 prior appointments for a Black woman to be selected to serve on the Supreme Court of the United States, but we’ve made it! We’ve made it — all of us,” Jackson said in remarks at a White House event the day after the Senate vote.

“I have dedicated my career to public service because I love this country and our Constitution and the rights that make us free,” Jackson also said.

Jackson, 51, has been confirmed since April, when the Senate voted 53 to 47 on her nomination. It was expected she would replace 83-year-old Justice Stephen Breyer — whom she clerked for after she graduated from Harvard Law School in 1996 — when he stepped down. His retirement will be effective Thursday.

This is obviously just a formality, making official what we’ve known was coming for months. Still, an important milestone worth noting. 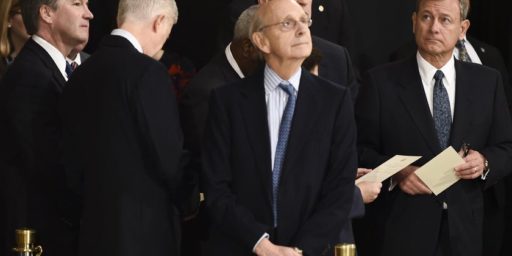