In the biggest NBA free agent move since LeBron James left and returned to Cleveland, Kevin Durant is joining the Golden State Warriors. 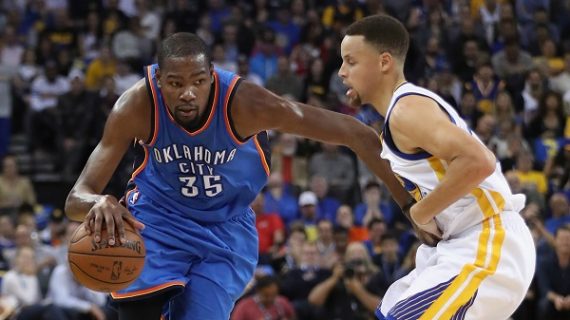 In the biggest NBA free agent move since LeBron James left and returned to Cleveland, Kevin Durant is joining the Golden State Warriors.

Saying it has been “by far the most challenging few weeks in my professional life,” Durant announced his decision Monday in a post on The Players’ Tribune.

He is expected to sign a two-year, $54.3 million contract, sources told ESPN’s Marc Stein. The deal would include a player option after the first year.

“The primary mandate I had for myself in making this decision was to have it based on the potential for my growth as a player — as that has always steered me in the right direction,” Durant wrote. “But I am also at a point in my life where it is of equal importance to find an opportunity that encourages my evolution as a man: moving out of my comfort zone to a new city and community which offers the greatest potential for my contribution and personal growth.

“With this in mind, I have decided that I am going to join the Golden State Warriors.”

The contract can be finalized July 7, when a leaguewide moratorium is lifted on signings and trades.

With Durant’s decision, the Warriors are unlikely to match the reported four-year, $95 million offer sheet that Harrison Barnes agreed to with the Dallas Mavericks.

Most of the prognosticators figured Durant’s free agent tour was an ego trip and that he would ultimately return to OKC. Not only did he and Russell Westbrook come within millimeters of upsetting Golden State and going to the NBA finals this season, the Thunder could pay him more money and his legacy would certainly be more favorably impacted by bringing a championship to the only team he’d ever played with than as a carpetbagger with what was already the NBA’s most talented team.

One would think that Golden State would be prohibitive favorites to win another championship with the addition of another Top 3 player. While I contend that LeBron is far and away the best player in the league, Stephen Curry is the reigning back-to-back MVP and Durant has one of those as well. Barnes is a fine player but no GM in the league would prefer him to Durant.