Kim Jong-Un Is Still Not Dead 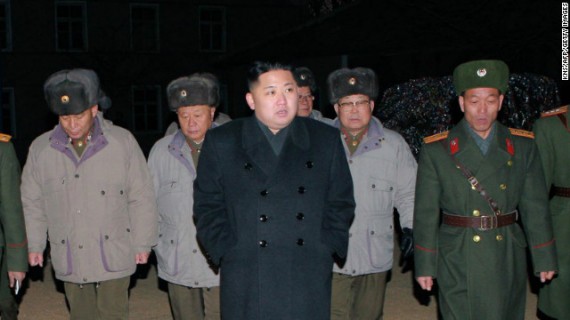 Yesterday, rumors swept the Internet, primarily via Twitter, that the new leader of North Korea had been assassinated in Beijing:

The claim that Kim, supreme leader of North Korea since the death of his father Kim Jong Il in December, had died apparently stemmed from a message sent out by a man who works near the country’s embassy in Beijing.

He posted on Sina Weibo: ‘Downstairs from the office, the cars at the Korean embassy are increasing rapidly, now there are over 30 cars. It’s the first time I’ve seen this situation, did something happen in Korea?’

This seemingly innocuous question, bolstered by other witnesses who saw an unusual number of cars at the embassy, was magnified by the power of internet gossip into a rumour that Kim had been assassinated by gunmen who burst in his bedroom and were subsequently killed by his bodyguards.

Wilder commentators even spun the supposed assassination in to a broader claim that a coup was underway in North Korea which could depose the Kim dynasty, rulers of the country ever since it split with the south in 1948.

But when ABC News asked U.S. officials for confirmation of the assassination rumours, one simply told them, ‘There’s nothing to this.’

Another official said: ‘Our experts are monitoring the situation and we see no abnormal activity on the [Korean] peninsula and nothing that credits that tweet as accurate.’

It was thought that the death of the elder Kim would herald a period of instability, potentially leading to regime change, but those expectations have not been fulfilled.

A less dramatic but equally bizarre explanation for the large number of cars at the North Korean embassy was suggested by Gawker and Chinese news agency Phoenix.

They pointed out that this month would have been the 70th birthday of Kim Jong Il, and a large number of events including tours of China and North Korea are set to mark the anniversary.

It sounds like a totally implausible story, of course. The idea that the leader of a foreign country could be assassinated in his own country’s embassy in the middle of Beijing and the only news about it would be on the Chinese equivalent of Twitter makes no sense at all. And yet, the story started getting repeated. Then, someone set up a fake BBC News account on Twitter yesterday afternoon that send out a “Breaking News” alert confirming Kim’s death. That story ended up getting repeated by thousands of people, and seen by thousands more. And it was all untrue.

Max Fisher offers an explanation for why people might have found a story like this believable despite the questionable sourcing:

The answer may have something to do with how Americans conceive of the difference between open societies, like ours, and closed societies, like those of China and North Korea. If a Western head of state had been assassinated in a neighboring Western capital, the news would saturate the globe within moments. We understand that information doesn’t work the same way in China or North Korea, that news is controlled and its flow regulated. But the Western imagination often sees Chinese and North Korean societies as something akin to George Orwell’s 1984, when the truth is much more complicated.

Information about what happens inside North Korea is, in fact, rare and often inscrutable. Kim Jong Il had been dead for hours and his country officially rudderless when the news finally broke, something that would likely have been impossible in any other country. Key events are rarely understood by the outside world, if we even find out. Last December, a freight train was derailed in a suspected attack; no one outside North Korea knows why or by whom. The hermit kingdom’s bizarre and Orwellian opacity has long fascinated the world. The images out of the country are so bizarre and hard information so scant that there’s little to prevent our imaginations from running wild. And the status of Kim Jong Un’s rule is still so uncertain (is he really in charge or is the military? does he maintain tight control or is the regime nearing collapse?) that we are ready to believe anything.

But China is not North Korea. Though it still sometimes appears that way in the Western conception, the country has transformed since the days of Mao Zedong, when they really were similar. Though the Chinese state is still one of the world’s most repressive, reliably ranking at or near the bottom of every list of countries by civil liberties or basic rights, Chinese society is vibrant and noisy, especially in the capital, where the “assassination” reportedly took place. Individuals may not be allowed to organize, protest, or discuss sensitive events, but they do it anyway, in small ways they expect will be tolerated. If they do any of them too much, they know, the consequences can be brutal. The Communist Party’s hand is heavy enough to prevent mass gatherings in Tienanmen Square, but not to keep hordes of witnesses to an assassination totally silent.

Beijing has almost 20 million people; maybe about half of its Internet users are on Weibo (the rate is 30 percent nationally). Why did only one of those witness the broad-daylight murder of a visiting head-of-state, who presumably would have been plowing through traffic with an enormous entourage? Why didn’t any of the many Western and other foreign reporters scattered across the city either see or hear anything? And why did no one report the massive security shut-down that Beijing’s army-sized police force certainly would have launched across the city?

These are all questions that a Chinese observer would have known to ask before quickly dismissing the story as an obvious fraud. But far-away Western bloggers and their readers, unfamiliar with the locations of China’s red-lines and perhaps a bit confused about the differences between Beijing and Pyongyang, might be willing to believe that Kim Jong Un’s assassination could really go unreported.

So perhaps people need to realize that Mao doesn’t rule China anymore, and that they need to learn a little bit more about Asia.

Apparent Assassination Leading To Tension Between North Korea And China