Larry King To Bill Clinton: We’re Both In The Zipper Club

A bit of a double entendre during last night’s final Larry King Live:

The guests did represent the wide spectrum of interviewees that the gravelly voiced King has faced across the table, or via split-screen hook-up, over a quarter-century (or, as he put it, “a third of my life”) on television – among them former president Bill Clinton, fit and felicitous as piped in from Arkansas. The encounter was hampered by annoying pauses and delays caused by a slothful satellite – and by a fleeting bit of embarrassment involving the term “zipper club.”

King said that he and Clinton were both members of that fanciful aggregation, an unfortunate reference considering that, earlier, Seacrest had clumsily asked King whether the fly on his trousers had a zipper or buttons. A bit belatedly, King explained that the “zipper club” is for men who’ve had open-heart surgery. “I’m glad you clarified that,” Clinton said, with a forgiving smile.

Of course, Bill and Larry would also qualify for membership in the other Zipper Club. 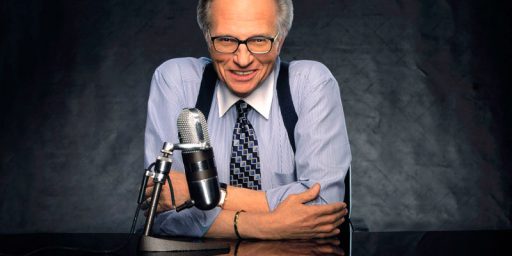 Larry King Hanging Up The Suspenders