President Lyndon Johnson considered flying to the 1968 convention and offering himself up for re-nomination. 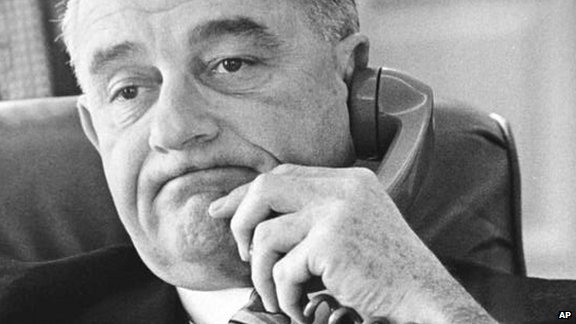 The final batch of tapes released by the LBJ library covers 1968, and allows us to hear Johnson’s private conversations as his Democratic Party tore itself apart over the question of Vietnam.

The 1968 convention, held in Chicago, was a complete shambles.

As they taunted the police with cries of “The whole world is watching!” one man in particular was watching very closely.

Lyndon Baines Johnson was at his ranch in Texas, having announced five months earlier that he wouldn’t seek a second term.

The president was appalled at the violence and although many of his staff sided with the students, and told the president the police were responsible for “disgusting abuse of police power,” Johnson picked up the phone, ordered the dictabelt machine to start recording and congratulated Mayor Daley for his handling of the protest.

The president feared the convention delegates were about to reject his war policy and his chosen successor, Hubert Humphrey.

So he placed a series of calls to his staff at the convention to outline an astonishing plan. He planned to leave Texas and fly into Chicago.

He would then enter the convention and announce he was putting his name forward as a candidate for a second term.

It would have transformed the 1968 election. His advisers were sworn to secrecy and even Lady Bird did not know what her husband was considering.

On the White House tapes we learn that Johnson wanted to know from Daley how many delegates would support his candidacy. LBJ only wanted to get back into the race if Daley could guarantee the party would fall in line behind him.

They also discussed whether the president’s helicopter, Marine One, could land on top of the Hilton Hotel to avoid the anti-war protesters.

Daley assured him enough delegates would support his nomination but the plan was shelved after the Secret Service warned the president they could not guarantee his safety.

While it’s doubtful Johnson could have won, it’s odd to abandon this plan on the grounds of safety. It’s true that John Kennedy had been assassinated just a few years earlier; indeed, it’s how Johnson became president in the first place. But Kennedy was riding slowly in an open car on a planned parade route. A surprise visit to a packed convention hall is a different matter altogether.