Sen. Joseph Lieberman (Conn.), who was on the national Democratic ticket in 2000, will cross the aisle to endorse Sen. John McCain (R-Ariz.) tomorrow, Republican sources said.

The two will appear together on NBC’s “Today” show tomorrow, then at an 8 a.m. town hall meeting in Hillsborough, N.H. They will talk with reporters after the meeting.

The move, which will help cultivate McCain’s moderate status, is an effort to draw attention to the McCain campaign, which needs a splash. Otherwise, it does not make sense for McCain because it will only remind core Republicans why they distrust him.

If we were having a national primary, it would be a be more advantageous for McCain to wait until the general election to start taking in endorsements from social liberals. Given that his strategy hinges on winning over moderate voters in New Hampshire, though, this can’t hurt.

Chris Cillizza agrees: “While Lieberman has grown less and less popular within Democratic ranks, he remains a respected figure among moderate and unaligned voters. That constituency is crucial in New Hampshire as unaffiliated voters, who can vote in either party’s primary on Jan. 8, make up roughly 40 percent of the Granite State electorate.”

Roger L. Simon thinks this means “McCain (who was being dismissed) may now be a force to reckoned with.”

Marc Ambider concurs: “The endorsement could help McCain with independents in the state. Combine that with news that Rudy Giuliani is scaling back his advertising buy there, that the Boston Globe endorsed McCain, and that McCain’s rivals are spending most of their time in Iowa.”

Jeralyn Merritt is underwhelmed: “This is not surprising to me — it’s just two of your father’s Oldsmobiles sticking together.” Still, she thinks the implications are interesting: “But with so many independents expected to vote at N.H. caucuses and Obama’s substantial support in N.H. coming from independents (rather than Democrats who favor Hillary there) I wonder whether Lieberman’s endorsement will result in Obama losing independent votes to McCain?”

Andrew Sullivan thinks it might. Further, he’s not sure “reinforcing his maverick, bipartisan independent appeal that the Christianist base suspects so much” helps McCain beyond New Hampshire.

Once one gets beyond his provocative headline, AllahPundit is somewhat less analytical: “He finally gets his revenge on the left, something he’s been flirting with publicly since January and which now comes not so much as an early Christmas gift to the nutroots than as a flaming bag of dog crap left on their collective porch.”

Pejman Yousefzadeh is more philosophical. He wonders, “How is it that a former Vice Presidential nominee of the Democratic Party, the man praised nearly eight years ago as being a pathbreaker, has ended up departing from the Democrats on so crucial an issue?” His hunch is it means a lot of Democrats with similar feelings.

Michael ‘A.J. Sparxx’ Illions goes further: “Would anyone be surprised to see John McCain, if he were to win the nomination, ask Joe Lieberman to run as his V.P.?”

Most of the lefty bloggers weighing in are less sanguine than Merritt. HuffPo’s Ari Melber sniffs, “Senator Joe Lieberman will finally come clean on Monday, unleashing his inner-Republican.”

Sean-Paul Kelley dismisses any talk of Lieberman and McCain as moderates: “They are a bad joke and smell about as bad as an undergraduate term paper.”

FDL’s Phoenix Woman rants about Lieberman “screw[ing] another politician named Clinton” via a “self-serving betrayal of them” culminating “spitting in her face” (along with Harry Reid’s, naturally).

in the final analysis it is clear that Joe Lieberman did nothing to help Al Gore on the ticket in 2000. Lieberman was supposed to bring aboard Jewish voters, as well as Republicans and Independents who were supposedly disaffected by Sen. Clinton’s affair. He didn’t help at all. So, his endorsement of John McCain and a possible McCain-Lieberman ticket would be a drag on the Republican ticket as well.

UPDATE: Here’s a video of the endorsement:

It won “Play of the Day” honors from the Associated Press. 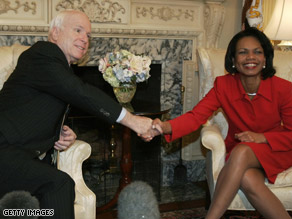