Limbaugh and Hannity Off Cumulus Stations?

The nation's second largest broadcaster is balking at the prices to keep Rush Limbaugh and Sean Hannity on its air. 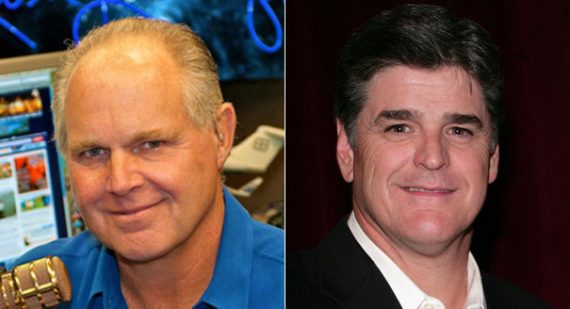 The nation’s second largest broadcaster is balking at the prices to keep Rush Limbaugh and Sean Hannity on its air.

In a major shakeup for the radio industry, Cumulus Media, the second-biggest broadcaster in the country, is planning to drop both Rush Limbaugh and Sean Hannity from its stations at the end of the year, an industry source told POLITICO on Sunday.

Cumulus has decided that it will not renew its contracts with either host, the source said, a move that would remove the two most highly rated conservative talk personalities from more than 40 Cumulus channels in major markets.

The decision comes after negotiations between Cumulus and Premiere Networks, the division of Clear Channel that distributes Limbaugh and Hannity’s shows, broke down due to disagreements over the cost of the distribution rights, the source said.

[I]n recent weeks, Cumulus has been quietly reaching out to radio talent agents and political insiders about new local and regional station hosts to fill some of the airtime that will be left vacant by Limbaugh and Hannity, industry sources said. Cumulus is also expected to move some of its existing talent — which includes Mike Huckabee, Mark Levin, and Michael Savage — into one of the slots.

Well, at least nobody is going to accuse them of ideological bias. Unless this is a secret plot to make Republicans seem even more crazy.

UPDATE:  Alan Colmes says everyone is misinterpreting this story:

Cumulus and Clear Channel have been buying up stations in major markets. Limbaugh and Hannity are syndicated by Premiere, which is owned by Clear Channel. Rather than pay fees to Cumulus to carry these shows it makes more sense to put them on their own properties, reduce local talent costs, and save those fees. The two top-rated talkers aren’t going anywhere. They’re just changing dial positions and, in many cases, to better signals.