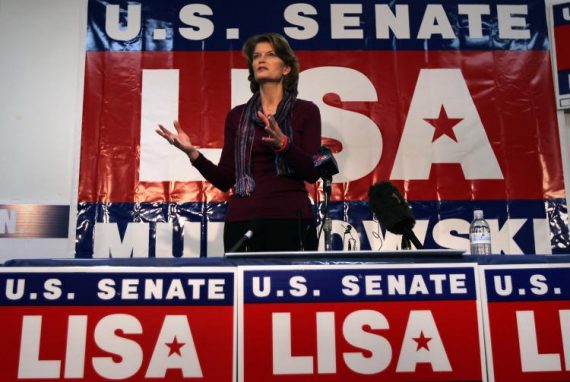 Alaska Senator Lisa Murkowski joined Republicans in voting for the Blunt Amendment last week, which would have overturned the HHS mandate adopted in January and given employers a wide latitude in declining to cover certain items in employee health insurance based on religious conscience. The Amendment failed, of course, when the GOP was unable to garner the 50 votes needed to defeat the Democratic Majority’s Motion to Table. Then, she went home for the weekend:

Over the weekend, Sen. Lisa Murkowski learned the hard way not to get between women and birth control.

Back from Washington, D.C., for the start of the Iditarod Sled Dog Race, the senator kept running into female voters who wrote in her name in the last election — moderate women who did not always vote Democrat or Republican. These women were coming unglued.

The reason: Murkowski’s support for a measure that would have allowed not just religious employers, but any employer, to opt out of providing birth control or other health insurance coverage required by the 2010 health-care law for moral reasons.

I called her office Friday looking for an interview but didn’t expect to get one. Then an email arrived from her account on Saturday, agreeing to meet me Sunday night at the Millennium Hotel.

We talked for 45 minutes. What Lisa Murkowski told me I already suspected. She’s a moderate. She supports abortion rights and contraception coverage. She also doesn’t line up completely with the Catholic Church when it comes to birth control. She regretted her recent vote.

“I have never had a vote I’ve taken where I have felt that I let down more people that believed in me,” she said.

She’d meant to make a statement about religious freedom, she said, but voters read it as a vote against contraception coverage for women. The measure was so broad, it’s hard not to read it that way. I suspect Murkowski saw that, but for reasons she didn’t share with me, voted for it anyway.

Murkowski was a leading voice among Republicans supporting religious organizations that said the administration’s accommodation didn’t go far enough. Murkowski aligned herself with the church position in a letter to the Catholic Anchor newspaper published Feb. 23.

“Unfortunately, the Obama administration unilaterally determined that religious hospitals, charities and schools will be required to go against their deeply-held — and constitutionally-protected — beliefs when offering health care services to current employees,” Murkowski wrote.

But when I talked to Murkowski, her position had softened. She said she voted for the Blunt Amendment (proposed by Missouri Sen. Roy Blunt), to send a message that the health care law needed a stronger clause for religious conscience. It was supposed to be a vote for religious freedom, she said, but to female voters back home it looked like a vote against contraception. The language of the amendment was “overbroad,” she said.

“If you had it to do over again, having had the weekend that you had with women being upset about the vote, do you think you would have voted the same?” I asked.

Murkowski said she believes contraception should be covered and affordable, except when it comes to churches and religiously affiliated organizations, like some universities and hospitals. She sponsored a contraception coverage bill as a state legislator in 2002. That bill exempted “religious employers.” She said her position hasn’t changed.

“I have always said if you don’t like abortion the best way to deal with it is to not have unwanted pregnancies in the first place,” she said. “How do you do that? It’s through contraception.”

I pointed out that her support for birth control conflicts with the Catholic mandate against it.

One wonders if Republican Senators from other states faced similar reactions from constituents when they returned home.