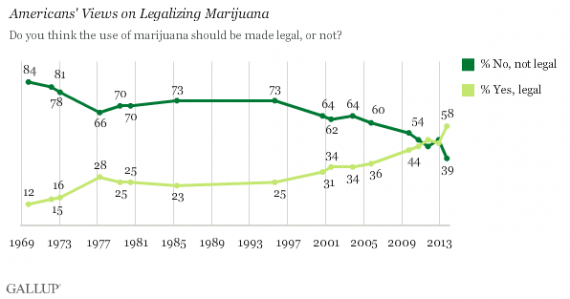 According to a new Gallup poll, we’ve reached a milestone of sorts in that a majority of Americans now support legalizing marijuana:

WASHINGTON, D.C. — For marijuana advocates, the last 12 months have been a period of unprecedented success as Washington and Colorado became the first states to legalize recreational use of marijuana. And now for the first time, a clear majority of Americans (58%) say the drug should be legalized. This is in

A sizable percentage of Americans (38%) this year admitted to having tried the drug, which may be a contributing factor to greater acceptance.

Success at the ballot box in the past year in Colorado and Washington may have increased Americans’ tolerance for marijuana legalization. Support for legalization has jumped 10 percentage points since last November and the legal momentum shows no sign of abating. Last week, California’s second-highest elected official, Lt. Gov. Gavin Newsom, said that pot should be legal in the Golden State, and advocates of legalization are poised to introduce a statewide referendum in 2014 to legalize the drug.

Another similarity with the same-sex marriage debate is the fact that Republicans are the one partisan group that is dragging its feet:

As with same-sex marriage, this appears to be a cultural shift rather than a temporary change in opinion that is likely to reverse itself in the future. Instead, I would expect support for legalization to increase as time goes on and for changes to the law like those we’ve seen in Colorado, Washington, and California to become more and more of the rule rather than the exception. On the whole, that strikes me as a good thing.