Via WaPo:  Stocks dip as lawmakers remain at standoff on raising US debt limit; Dow falls for fourth day:

The Dow is headed for its worst weekly decline in nearly a year and is now 4 percent below the 2011 high it reached on April 29. The S&P, which serves as a benchmark for most mutual funds, is also down 4 percent from its recent peak.

Perhaps these numbers will get the attention of the intransigent in Congress?

There are only 3 trading days left until the deadline. 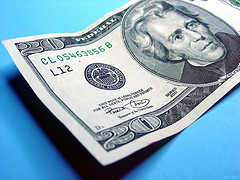