Thanks apparently to the fact that it remained unwilling to get in line behind the Trumpidians, the conservative owner of The Weekly Standard has shut the magazine down. 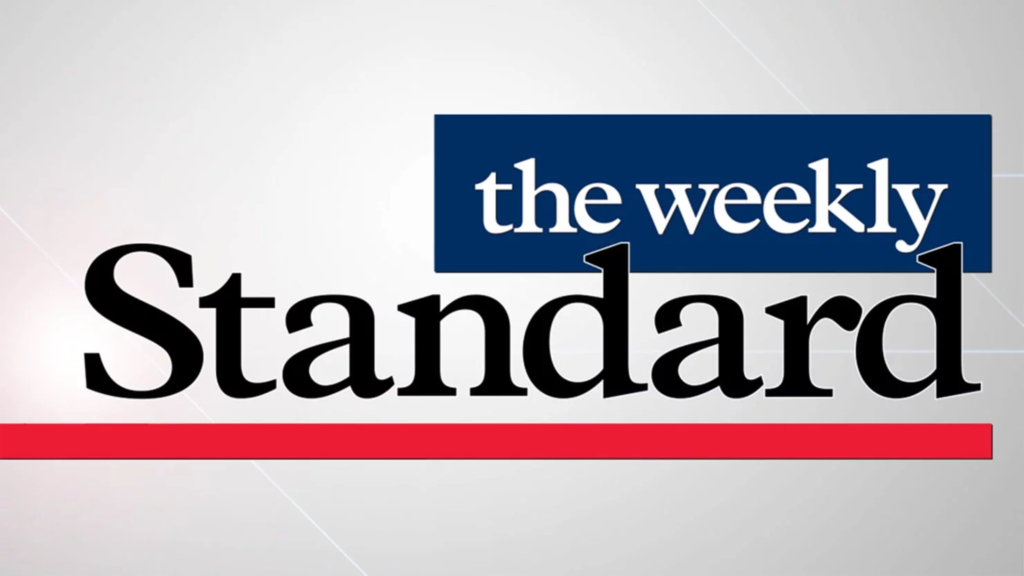 After twenty-three years of operation The Weekly Standard, one of the more influential publications on the right, abruptly closed its doors in what at least some are seeing as a decision rooted in an effort to silence conservative critics of President Trump:

The Weekly Standard, a primary voice of conservative Washington that found itself out of step with the Trumpward turn in the Republican Party, is ceasing publication after 23 years, its owners announced on Friday.

The cause of death was financial, ideological or personal, depending on who was doing the telling.

The magazine’s parent company, Clarity Media Group, cited a steep decline in subscriptions and revenues. But editorial leadership had clashed with ownership in some instances over its critical coverage of President Trump and the hard-right views of his defenders.

The Standard’s editor in chief, Stephen F. Hayes, pronounced himself “profoundly disappointed” by the decision on Friday to cease publication. The editor of Commentary magazine, John Podhoretz, who was a co-founder of The Standard in 1995, described the closing as a “murder” and “an entirely hostile act” perpetrated by malevolent owners.

Clarity Media, which is controlled by the billionaire conservative businessman Philip F. Anschutz, has devoted resources to The Washington Examiner, a publication that provides cozier coverage of the president. Talk of selling The Weekly Standard was floated, but the company decided against it.

At an all-hands meeting on Friday, the chief executive of Clarity Media, Ryan McKibben, disputed reports that the shutdown was related to the tenor of Trump coverage, instead citing poor financial performance, according to an attendee who spoke on the condition of anonymity to share sensitive conversations.

The attendee said it remained the overwhelming view of The Standard’s staff and leadership that Mr. Anschutz did not, in the end, want to own the leading Trump-skeptical publication in conservative media.

The acrimonious end was perhaps in keeping with a publication that was proudly heterodox from the start, eager to buck the prevailing values of conservative dogma and forge its own provocative point of view.

It grew into the dominant organ of neoconservatism and a leading voice in favor of intervention in Iraq, helping to define politics in the George W. Bush era. Among its star alumni were Tucker Carlson, Matt Labash and David Brooks.

Sold in 2009 to Mr. Anschutz, The Standard remained influential. But the Trump phenomenon posed a challenge. Originally denounced by Republican thought leaders like Mr. Kristol, who declared himself a supporter of the “Never Trump” movement, the president has since been embraced by his party — and by right-wing news outlets that are thriving with a diet of pro-Trump coverage.

The Weekly Standard took a different tack. The editors supported Mr. Trump’s Supreme Court picks and tax overhaul. But the magazine’s free marketeers did not cheer trade tariffs, and its foreign interventionists lamented the president’s retreat from a central role in global leadership. Criticism of a so-called deep state, a staple of Breitbart News and Fox News commentators like Sean Hannity, did not dominate its pages.

Some of the magazine’s critics on Friday delighted in its demise. “TAKE THAT YOU NEVER TRUMPERS,” Chuck Woolery, the “Love Connection” host turned Trump acolyte, wrote in a Twitter post. Breitbart News knocked the magazine as “once-influential” and a “Never-Trump publication.”

Clarity Media declined to comment beyond a formal written statement.

“The Weekly Standard has been hampered by many of the same challenges that countless other magazines and newspapers across the country have been wrestling with,” Mr. McKibben, the chief executive, wrote in a news release. “After careful consideration of all possible options for its future, it became clear that this was the step we needed to take.”

Not surprisingly, the President couldn’t resist the opportunity to dance on the Weekly Standard’s grave even as its staff was learning they were out of work just before the holidays:

The pathetic and dishonest Weekly Standard, run by failed prognosticator Bill Kristol (who, like many others, never had a clue), is flat broke and out of business. Too bad. May it rest in peace!

The truth, of course, is that Kristol, who is among the President’s most prominent and vocal conservative critics, had not been involved with the operation of the magazine for some time, although he did still occasionally contribute pieces for the magazine and, thanks to his role in its founding, remains associated with the publication in the minds of many people on the right and left. In any case, it didn’t take long for many of those who support the Standard’s editorial position to speculate about the reasons why the publication was being shut down. On his Twitter feed, for example, Jonah Goldberg contended that there were several parties who had expressed interest over the past several weeks in acquiring the magazine and keeping it in operation rather than letting it die in the manner that Clarity Media has done, but that the companies ownership chose to ignore those offers and go ahead with the option of shutting the magazine down. This was the basis for John Podhoretz’s charge that what happened was nothing short of a murder:

The compact between the Standard and its readership was that it would reflect an expansive conservative vision of America and the world and would evaluate the politics of the present moment as honestly as its writers and editors knew how. It would speak to, and from within, the conservative movement without being a Republican Party sheet. This approach was an immediate success. The Standard was the only successful high-end magazine launch of its time and, I believe, the last important print magazine created in America before the Internet began its search-and-destroy mission against those things published on the pulp products of dead trees.

To be sure, it has never made money. Magazines like it never make money. But its circulation has always been extraordinarily healthy in opinion-journal terms. And within the giant corporations run by the wealthy men who started the Standard and then bought it—Rupert Murdoch and then Anschutz—its annual losses were a rounding error, akin to the budget for the catering on one of their blockbuster movie productions. But if Anschutz had been motivated by an unwillingness to bear the cost any longer, he could have sold the Standard. He chose not to. He chose to kill it.

The cessation of the Standard is an intellectual and political crime. I hope and expect its subscribers, tens of thousands of whom have been with the magazine since its very first day, will demand refunds rather than serve as passive participants in this act of politico-cultural murder.

Max Boot, meanwhile, argues that the conservative movement needs a voice like the Standard now more than ever:

There’s nothing unusual about a rich owner losing interest in one of his playthings. What makes this case more tragic and infuriating is that Anschutz and McKibben refused entreaties from the Weekly Standard’s editor, Stephen Hayes, to sell the magazine. Rather than allow the magazine to live under new ownership, Anschutz and McKibben murdered it to harvest its subscriber list for the Examiner. So a talented staff of journalists is being thrown out of work just before Christmas in an act that is equal parts destructive, stupid and cruel.

The Standardites hope to reopen under a new name and with a new owner. Whether that happens, the Weekly Standard is no more, and it is appropriate to mourn its passing even while hoping for a rebirth. The Weekly Standard was, of course, a conservative magazine, but it is quite possible not to agree with some or even much of what it stood for while still appreciating its feisty editorials, fine reporting, elegant writing, witty satires, and a “back of the book” that offered serious book reviews, unpretentious film reviews, and cultural commentary from the likes of Podhoretz and Joseph Epstein. An awful lot of talented journalists have written for the Standard over the years, including Fred Barnes, David Brooks, Andy Ferguson, Matt Labash, Charles Krauthammer, David Frum, P.J. O’Rourke — and even Tucker Carlson in his pre-demagogic days.

The Weekly Standard was run for most of its history by Bill Kristol — a good friend who is gifted with an ironic disposition and a cheerful temperament. While he is a well-known conservative, Kristol is hardly doctrinaire. He opened the Standard to all sorts of viewpoints — many of them entirely apolitical — and then led it into fierce, principled opposition when Trump seized control of the right. I devoutly hope a new Standard will arise to lead the Republican Party out of the moral and political oblivion to which the president is consigning it.

I haven’t been a regular reader of The Weekly Standard for years, both because of the extent to which I’ve changed what I choose to read on a regular basis and because I simply don’t have the time to read everything that’s out there. Additionally, the Standard never really fell into the same ideological track that I did even in the time before Donald Trump (a time that is becoming increasingly difficult to remember, but I digress.) Both before and during the Bush Administration, it was also one of the primary outlets of the neoconservative foreign policy that brought us the Iraq War and a “War On Terror” that has expanded far beyond its intended goal of bringing the parties responsible for the September 11th attacks to justice or otherwise eliminating them. It’s also worth remembering the role that the Standard and writers such as Bill Kristol played in reinforcing the weaknesses and failures of the George W. Bush Administration and that it was Kristol was among those given “credit,” if that’s the right word, for promoting Sarah Palin as a national political figure long before she was selected to be John McCain’s running mate in 2008, a role which Kristol later seems to have come to regret.

Notwithstanding that, though, The Weekly Standard has stood out among conservative media over the past three years thanks to the unwillingness of its writers and editors to fall in line behind Donald Trump after his victory in the race for the Republican nomination became clear, and even more so after he won the Presidency. Unlike so-called conservatives who have turned into full-blown Trump fanboys and fangirls, the writers and editors at the Standard have chosen to remain consistent with their principles and call out the President the way he deserves to be called out despite the fact that its owner and publisher have become more and more pro-Trump. To be sure, the Standard isn’t the only conservative site where criticism of the Trump Administration is permitted, you can also find prominent and eloquent anti-Trump voices at Commentary and The American Conservative as well as several writers at National Review, such as David French, who have maintained their principles even as those all around them are sacrificing theirs. For the most part, though, the conservative pundits who are Trump critics have, as former Reagan Administration staffer Bruce Bartlett observed on Twitter today, moved on to mainstream media outlets where they can maintain their principles without having to worry about a publisher willing to shut a magazine down for ideological reasons. As for the rest of the conservative media, they have made their own choices when it comes to this President, and they will have to live with that choice going forward.