In another sign that John McCain is moving toward accepting public financing this fall, the Republican’s campaign is returning about $3 million in checks to contributors who have given money for his general election campaign, funds he could not use if he opts into the public system. McCain’s campaign, in letters to contributors, is asking supporters to write new checks to a special fund created to help the Arizona senator pay legal and accounting expenses related to compliance with the public funding system.

The move is largely procedural, and McCain’s campaign said yesterday that it has not yet decided whether to accept public funding or to raise money on its own for the November presidential election. But the decision to return checks – which was made as the Democratic candidates announced raising $60 million combined in March, nearly as much as McCain had raised for the entire campaign through February – indicates that McCain is laying the groundwork for doing so.

“Senator McCain has made it clear that he expects to participate in the general election public financing system, and he hopes the Democratic nominee will do so as well,” Brian Rogers, McCain spokesman, said in a statement. “The campaign reserves the right to change course, but these developments reflect our current plans.”

Presidential candidates who opt into the public financing system receive taxpayer money to run their campaigns in exchange for agreeing to certain spending limits; they can raise money from private donors only for the “compliance fund,” not to run their campaigns. This year, a candidate who accepts the terms would be limited to about $84 million in spending.

Mark Salter, a senior McCain aide, said a decision on whether to accept the money was something they would deal with down the road. “There’s no reason to make that decision right now,” he said. “We wouldn’t get it until after the convention anyway.”

Frankly, he’d save the taxpayers $42 million if he just quit the race now. Barack Obama’s probably got $84 million laying around the office in checks he hasn’t bothered to deposit. McCain will likely be at a financial disadvantage either way but it would be political suicide to unilaterally disarm. Even with his problems with the base, he’ll be able to raise a couple hundred million if the alternative is Obama; more than that if Clinton somehow gets the nomination.

Graphic via The Page 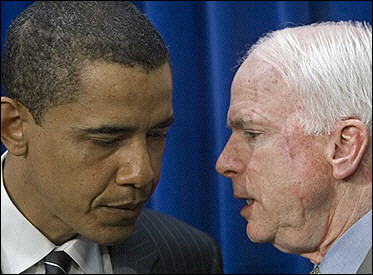 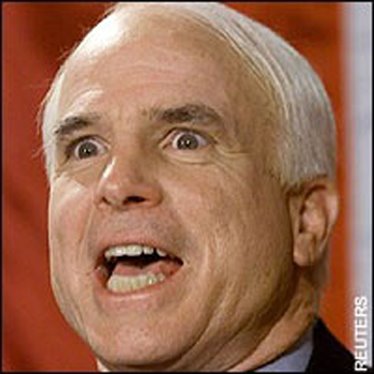