Media Coverage of the Candidates

Rick Perry has gotten the most and best coverage thus far in the campaign. President Obama has gotten mostly negative coverage.

Pew’s Project for Excellence in Journalism has looked at the news coverage of the Republican presidential candidates and President Obama. 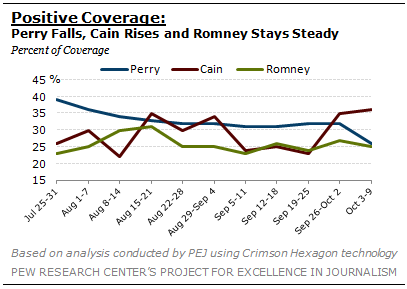 In the first months of the race for president, that weeding out period before citizens ever vote or caucus, Texas Governor Rick Perry has received the most coverage and the most positive coverage from the news media of any GOP contender, according to a new study by the Pew Research Center’s Project for Excellence in Journalism.

But in what is already a fluid race, Perry lost that mantle to Herman Cain two weeks ago, after the Florida straw poll and a faulty debate performance, according to the study, which combines traditional media research methods with computer algorithms to track the level and tone of coverage of candidates for president. The analysis also shows that Cain’s narrative actually started to become more positive in late August, six weeks before he began to rise in the polls.

Meanwhile, former Massachusetts Governor Mitt Romney remains the one constant—portrayed as the ever-present if not passionately embraced alternative in the GOP field. Despite often leading in the polls, Romney has typically received less coverage and less positive coverage than his chief rival of the moment—and that remained true in early October after Perry faltered. Overall, he is second in the amount of attention received and the tone of that narrative has been unwaveringly mixed.

If I had been forced to guess, I’d have gone with either Sarah Palin or Michele Bachmann as having gotten the most coverage. That’s likely a function of my viewing things through the prism of the blogosphere and Twitter rather than watching the nightly news. Presumably, though, the reason that Romney is getting less coverage than Perry and Cain is the same reason that social media have given disproportionate attention to Palin and Bachmann: They’re interesting and relatively unknown, whereas Romney has been around longer and really isn’t making much “news.”

One man running for president has suffered the most unrelentingly negative treatment of all, the study found: Barack Obama. Though covered largely as president rather than a candidate, negative assessments of Obama have outweighed positive by a ratio of almost 4-1. Those assessments of the president have also been substantially more negative than positive every one of the 23 weeks studied. And in no week during these five months was more than 10% of the coverage about the president positive in tone. 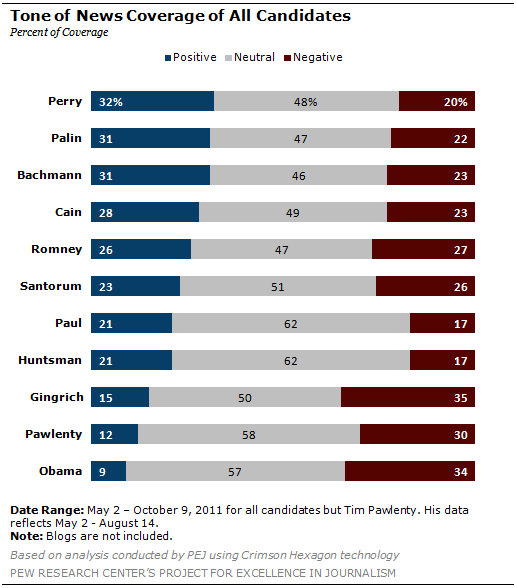 Steve Benen points to this as evidence that the “liberal media” meme is a sham. While I largely agree that the meme is overblown and outdated in the Fox News era, ideological bias or the lack of it isn’t the reason Obama is getting less favorable coverage than most of the Republicans. Rather, it’s because he’s the sitting president and things are going to hell in a handcart around him.

Because most of the Republican candidates are relatively new on the national scene, much of the early coverage of them was of the “meet the candidate” variety, which is likely to be fairly positive. Additionally, it’s fairly easy to make positive news: winning a straw poll somewhere, getting an endorsement, or making a surprisingly strong showing in some poll or debate. For Obama, most of the coverage is about falling poll numbers, the drip-drip-drip of bad news on the economy, failed attempts to get things passed through a recalcitrant Senate, and carping from the base that he’s been a disappointment.

Additionally, despite my high regard for Pew’s work, I’m not sold on the research methodology here. This is “content analysis,” which is based on coding phrases and paragraphs:

The study examined four basic elements of each candidate’s narrative. It measured how much attention each candidate received in news media. It also examined the tone of that coverage. Then, separately, it assessed the amount of attention and tone in blogs.

To assess the tone of coverage, PEJ researchers then employed computer algorithmic software from Crimson Hexagon. Researchers conducted a tone analysis and then “trained” the algorithm to follow the same rules as they had themselves. PEJ also conducted inter-coder tests to ensure the computer coding was replicable and valid by comparing human coding to the results derived by the algorithm. The project also had different people build the algorithms separately to ensure that they were achieving consistent results. Each computer algorithm was then additionally tested for reliability by having multiple researchers review the content assessed and the results.

While this is a widely accepted technique, it is not necessarily indicative of the takeaway of the average reader or viewer.

For example, my strong impression is that Jon Huntsman’s coverage his been overwhelmingly positive. He’s almost universally treated as highly competent, smart, and honorable.  But, according to the “tone” analysis, it’s been 21 percent positive and 17 percent negative.  My guess is that the latter are late-paragraph disclaimers that, alas, Huntsman is doing quite poorly in the polls and is highly unlikely to get the nomination.

Similarly, my strong impression is that Palin and Bachmann have been portrayed quite poorly, with Palin coming across as a manipulative grandstander and Bachmann as a religious zealot and weirdo.  But, according to the “tone” analysis, both have been portrayed positively 3 to 2. But if this comes from equal treatment of the overall message of the piece with throwaway lines about their charismatic appeal and the enthusiasm of their relatively small base of supporters, it’s just misleading. By that standard, “Sarah Palin is a good looking woman and terrific public speaker, but she’s too stupid to be president” is 2-to-1 positive.