Abdel Fattah el-Sisi is a name we're likely to be seeing in the news for some time to come. 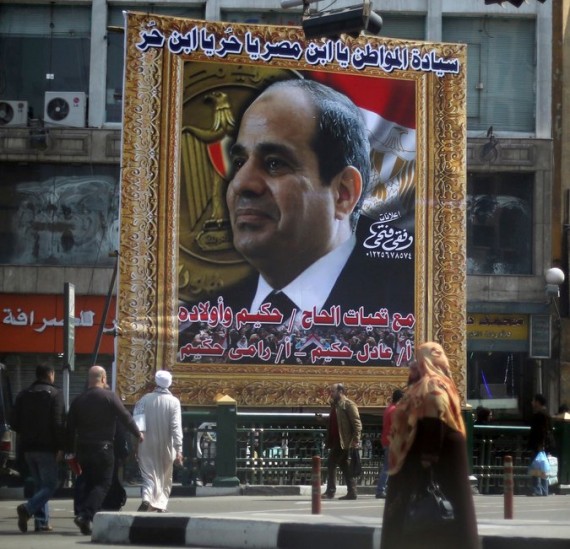 The New York Times has an interesting profile of Abdel Fattah el-Sisi, the Egyptian military leader who last year led the coup that overthrow the democratically elected Presidency of Mohammed Morsi and who will soon become President himself in an election that will occur under the watchful eyes military rule:

CAIRO — Abdel Fattah el-Sisi, the former army officer soon to be Egypt’s president, promises to remedy Egypt’s crippling fuel shortage by installing energy-efficient bulbs in every home socket, even if he has to send a government employee to screw in each one.

“I’m not leaving a chance for people to act on their own,” Mr. Sisi said in his first and most extensive television interview. “My program will be mandatory.”

Mr. Sisi, 59, disciplined and domineering, is universally expected to become Egypt’s head of state after a pro forma election scheduled to begin Monday. He has already been the nation’s paramount decision maker since he ousted Egypt’s democratically elected president, Mohamed Morsi, last summer.

Now, more than three years after the Arab Spring uprising raised hopes of a democratic Egypt, his move into the presidential palace will formally return Egypt to the rule of a paternalistic military strongman in the tradition of Gamal Abdel Nasser, Anwar Sadat and Hosni Mubarak.

In his long rise to power and a compressed, three-week campaign, Mr. Sisi has shown that he, too, sees himself as a morally superior father figure responsible for directing and correcting the nation, with a firm hand if needed.

“You want to be a first-class nation?” he asked of Egyptians, in a leaked recording of an off-the-record conversation with a journalist-confidant. “Will you bear it if I make you walk on your own feet? When I wake you up at 5 in the morning every day? Will you bear cutting back on food, cutting back on air-conditioners?”

“People think I’m a soft man,” he added. “Sisi is torture and suffering.”

He has quickly displayed a certain nostalgia for the Nasserite state dominance of the economy that set the stage for six decades of stagnation. He has proposed government projects to force down prices and profits as well as to irrigate and give away vast areas of desert. And he has expressed frankly condescending views of the public.

The military, Mr. Sisi told fellow officers in a leaked recording of a meeting last December, is “like the very big brother, the very big father who has a son who is a bit of a failure and does not understand the facts.” Urging patience with public criticism of the army, Mr. Sisi asked: “Does the father kill the son? Or does he always shelter him and say, ‘I’ll be patient until my son understands’?

Mr. Sisi says the job of president also includes improving public morals and “presenting God” correctly. He has said bluntly that as president he would take legal action against personal insults. And although a wave of protests against Mr. Morsi helped Mr. Sisi to power, he has defended the current government’s virtual prohibition of demonstrations.

“The existing dangers to the Egyptian state are much bigger than a discussion of the protest law,” he said. “Anybody who thinks otherwise wants to destroy Egypt.”

It shouldn’t be all that surprising that el-Sisi is at heart an authoritarian who sees himself as someone with the calling to “guide” Egypt in what he believes to be the proper direction. He was born in 1954, just two years after a military coup led by Gamel Nasser overthrew the Egyptian Monarchy and just five days after the Revolutionary Command Council led by Nasser took over full control of the country. When he entered the military at the age of 21, the Egyptian military was at the pinnacle of Egyptian domestic politics under Anwar Sadat, a former General, and would continue in that role during the 30 years the country was led by Hosni Mubarak, another former military officer. El-Sisi rose through the ranks, then, in a military that saw itself as the natural leader and controller of Egyptian society and an entity that was therefore entitled to special privileges not available to ordinary Egyptians. It would be surprising if he didn’t see himself in this manner, because he is, in the end, a product of the environment that he has been a part of his entire adult life.

That doesn’t mean there isn’t anything to be concerned about, of course. If you read deeper into the article, you find el-Sisi talking about himself in near messianic terms. He talks about dreams where Egyptian leaders of the past have told him it is his destiny to be a great leader of the Egyptian people. It’s hard to tell if he actually believes these things, or if he allows them to leak to the public in order to boost his reputation with a public that seems ready to return to military rule after their brief flirtation with something that at least tried to approach democratic self-government. Whatever the case, though, it’s always struck me that any national leader who starts spinning tales of destiny in which they play a central role is usually someone not to be trusted.

Perhaps the most interesting thing to come out of the Times article, though,is what it reveals about the role that el-Sisi played behind the scenes in the events over the past three years, and how he clearly foresaw the protests that would eventually lead to the downfall of the Mubarak regime:

A few months after Mr. Mubarak promoted him to head of military intelligence in 2010, General Sisi delivered a prescient report to top generals. He argued that their own interests, and Egypt’s, would soon diverge from the president’s, according to three people briefed on the discussions by General Sisi and other top military leaders.

General Sisi told the top officers that military intelligence had concluded that Mr. Mubarak was preparing to anoint his younger son, Gamal, as Egypt’s next president, perhaps as soon as the elder Mubarak’s 83rd birthday, in May 2011, these people said.

Egyptians would rise up in revolt, Mr. Sisi predicted, and the internal security forces would not be able to contain it. So Mr. Mubarak would call for help from the army, General Sisi said, according to all three independent accounts.

Mr. Sisi “told them, ‘Are we ready? How do we respond to this question?’ ” recalled Mohamed Hassanein Heikal, 90, a former journalist-historian who was close to President Nasser and is now close to Mr. Sisi. “He was the one who proposed to the army that they should not back Mubarak.”

The anticipated revolt erupted five months earlier than Mr. Sisi thought, in January 2011, set off by events in Tunisia. But the generals followed precisely the plan Mr. Sisi laid out, said Mr. Nafaa, the Cairo University political scientist, who learned about Mr. Sisi’s report along with Mr. Risk at a dinner with Mr. Sisi and three other generals after the officers had finally removed Mr. Mubarak.

“The army deployed very smoothly on January 28, 2011, because they had a plan to go to the streets, and they simply moved it forward, to take advantage of the revolution,” Mr. Nafaa added.

It was apparent even as the Mubarak regime collapsed that the military was acting primarily with the goal of protecting its own interests, and while that had meant protecting Mubarak’s rule for some three decades they were quick to abandon him once it became apparent that he could not survive. Once it became clear that Mohammed Morsi and his supporters posed a threat to the military, and when protesters threatened a return to the chaos of January and February 2011, the military stepped in, removed Morsi, and returned to the role in Egyptian political life that it has had for some 62 years now. El-Sisi is making it clear that he intends to do everything he can to keep that order in place through repression of political enemies, government intervention, and outright bribery and corruption. Whether it can last this time will depend largely on whether or not the military can keep the crowds quiet. If they can’t then he may have to become even more repressive than his predecessors if he wants to stay in power.

Whatever the outcome, life is likely to continue to suck for the average Egyptian.