The main who coined the word "meritocracy" meant it as a pejorative term. 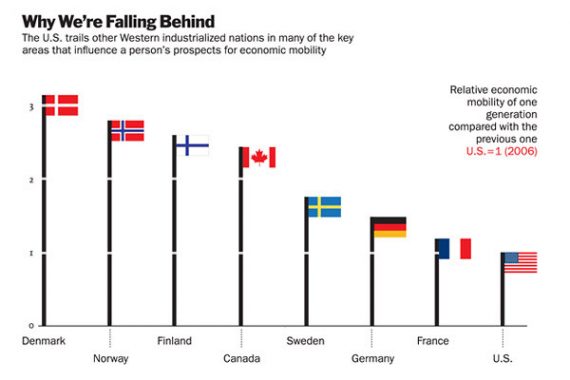 An Economist essay reminds us that,

[T]he man who invented the word [meritocracy] meant it as a pejorative term. In “The Rise of the Meritocracy”, published in 1958, Michael Young, a British sociologist and Labour Party activist, painted a futuristic picture of a dystopian Britain, where the class-based elite had been replaced with a hierarchy of talent. Democracy was dispensed with. Clever children were siphoned into special schools and showered with resources. The demoralised talentless masses eventually revolted.

The world is starting to look a bit like Young’s nightmare vision. The top 1% have seen their incomes soar because of the premium that a globalised high-tech economy places on brainy people. An aristocracy that gambled its money away on “wine, women and song” has been replaced by a business-school-educated elite whose members marry one another and spend their money wisely on Mandarin lessons and Economist subscriptions for their children.

It is, of course, good that money flows to talent rather than connections, and that people invest in their children’s education. But the clever rich are turning themselves into an entrenched elite. This phenomenon—call it the paradox of virtuous meritocracy—undermines equality of opportunity.

We’ve discussed this issue before; it’s not going away.

Back in its Horatio Alger days, America was more fluid than Europe. Now it is not. Using one-generation measures of social mobility—how much a father’s relative income influences that of his adult son—America does half as well as Nordic countries, and about the same as Britain and Italy, Europe’s least-mobile places. America is particularly exposed to the virtuous-meritocracy paradox because its poor are getting married in ever smaller numbers, leaving more children with single mothers short of time and money. One study suggests that the gap in test scores between the children of America’s richest 10% and its poorest has risen by 30-40% over the past 25 years.

That’s not really shocking. It’s not that the poor are getting poorer; they aren’t. It’s that the rich are getting much richer.

American conservatives say the answer lies in boosting marriage; the left focuses on redistribution. This newspaper would sweep away tax breaks such as mortgage-interest deduction that help richer people, and target more state spending on the poor. But the main focus should be education policy.

Whereas most OECD countries spend more on the education of poor children than rich ones, in America the opposite is true. It is especially bad at early-childhood education, which can have a big influence on results later (see article): only one four-year-old in six in America is in a public pre-school programme. Barack Obama has increased pre-school funding, but deeper change is needed. Because the school system is organised at the local level, and funded mainly through property taxes, affluent areas spend more. And thanks to the teachers’ unions, America has been far less willing than, say, Sweden to open its schools to choice through vouchers.

In higher education stiff fees in America mean that many poor children never get to university, and too many of those who do drop out. Outdated affirmative-action programmes should give way to schemes to help students based on the poverty of the applicant rather than the colour of his skin.

As for the rich strivers, there is nothing that you can, or should, do to stop people investing in their children, but you can prevent them from unfairly adding to their already privileged position. For instance, standardised tests were supposed to favour the brainy, but the $4.5 billion test-prep industry, which disproportionately caters to the rich, indicates that this is being gamed. Intelligence tests should be more widely used. The other great unfairness has to do with the preferences that elite American universities give to well-connected children, either because their parents went to the university themselves or because they have given money. An educational institution should focus on attracting the best people, and then work out how to finance the poorer people in that category.

Whatever the merits of the home mortgage interest deduction, it’s hardly a major factor in the social mobility problem. And while I absolutely oppose legacy admissions to university on principle, eliminating it entirely would mostly serve to open more slots for the smartest children of the top 1% at the expense of the best connected children of the top 1%, not bringing more children of abject poverty into the Ivies.

Unless we’re going to nationalize funding for primary and secondary education—and we’re not—I don’t see how we’re going to fix local inequities. Even in the affluent areas, household wealth matters considerably. I live in Fairfax County, Virginia and our public schools are some of the best in the country. The rich nonetheless overwhelmingly send their children to private schools, many of which charge an annual tuition comparable to a private university, for a variety of social and competitive reasons. Unless we’re going to forbid that, they’re simply going to have a massive leg up over the poor and even middle class.

Frankly, I think the most useful thing that can be done about the problem right now is simply shedding light on it.  Americans believe our own mythology and think we’ve got the finest education, healthcare, and political systems in the history of mankind and that we’re the freest, most upwardly mobile of all societies. That none of those things has been true for a long time is a story that needs to be told; it’ll take some time to make people believe it.