The American economy is so bad that people are reverse migrating to the Third World. 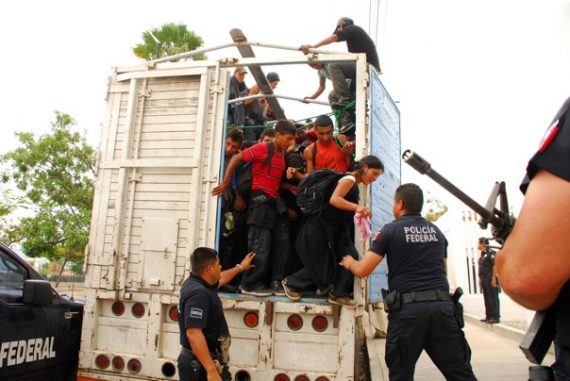 The American economy is so bad that people are reverse migrating to the Third World.

The largest wave of immigration in history from a single country to the United States has come to a standstill. After four decades that brought 12 million current immigrants—more than half of whom came illegally—the net migration flow from Mexico to the United States has stopped—and may have reversed, according to a new analysis by the Pew Hispanic Center of multiple government data sets from both countries.

The standstill appears to be the result of many factors, including the weakened U.S. job and housing construction markets, heightened border enforcement, a rise in deportations, the growing dangers associated with illegal border crossings, the long-term decline in Mexico’s birth rates and changing economic conditions in Mexico.

Among the report’s key findings:

Among the report’s key findings:

It looks to be the first reversal in the trend since the Depression, and experts say that a declining Mexican birthrate and other factors may make it permanent.

“I think the massive boom in Mexican immigration is over and I don’t think it will ever return to the numbers we saw in the 1990s and 2000s,” said Douglas Massey, a professor of sociology and public affairs at Princeton University and co-director of the Mexican Migration Project, which has been gathering data on the subject for 30 years.

The trend could have major political consequences, underscoring the delicate dance by the Republican and Democratic parties as they struggle with immigration policies and court the increasingly important Latino vote.

Illegal immigration has emerged as one of the most emotional political issues in the country — one that dominated much of the Republican presidential contest and has proven complicated for President Obama.

Mitt Romney has courted conservatives with aggressive anti-illegal immigration rhetoric. But the GOP presidential hopeful has said in recent days that he wants to build ties with Hispanics, many of whom have chafed at his statements, and the new immigration trends could offer him a chance to soften his stance.

Obama has been criticized by immigrant advocates for stepped-up deportation policies that analysts have said were partly responsible for the decreasing flow of Mexicans into the United States. The trend could offer the president a political silver lining: the chance to take credit for a policy success that, his aides have said in the past, should persuade Republicans to embrace a broad immigration overhaul plan.

In addition to economic factors and the US crackdown on immigration, something else is going on: birth control has made it south of the border.

In 1960, a typical Mexican woman was expected to have more than seven children, but by 2009 that number had dropped to just over two — a decline that presages a sharp reduction in the number of young workers seeking to come to the United States.

One hopes that the lower birthrate continues; it’s a sign of a modernizing economy and ultimately a more prosperous life for the 113-odd million people with whom we share a border. At the same time, of course, it would be awfully nice if the US economy rebounded to it former robust form and became attractive to unskilled immigrants looking to improve their lot in life.

In the meantime, maybe we can come up with a rational immigration policy. I wouldn’t advise holding your breath, however.

More Mexicans Are Leaving The U.S. To Return Home Than Arriving In The U.S.