Michele Bachmann Takes In More Donations Than Any Other Republican

Michele Bachmann raised more money in the First Quarter of 2011 than any other Republican. Which means that she'll have to be taken seriously if she decides to run for President. 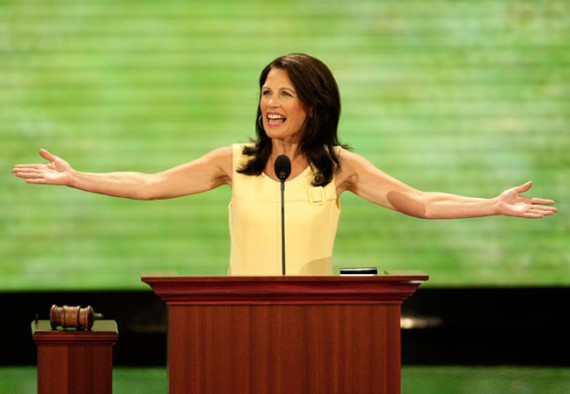 Whatever else you might say about Michele Bachmann, she is proving herself to be an incredibly effective fundraiser:

Rep. Michele Bachmann (R-Minn.) raised more than $2 million in political contributions over the first 90 days of 2011, she reported Friday — a sum that serves as a reminder of her fundraising prowess as the 2012 Republican presidential campaign enters a crucial early stage.

The Minnesota conservative raised $1.7 million for her congressional reelection fund and an additional $500,000 for her federal political action committee.

Her donation total slightly exceeds the $1.8 million former Massachusetts governor Mitt Romney announced Thursday that he brought in via his Free and Strong America PAC in the first quarter. Candidates can transfer money from their personal campaign committee to a presidential account but not from a political action committee.

Bachmann’s strong first quarter showing comes on the heels of her raising $13.5 million for her 2010 campaign, by far the largest total compiled by any House challenger or incumbent for a single election.

The impressive first-quarter numbers give Bachmann and Romney a bit of a tailwind heading into the most crucial three-month period for presidential contenders to establish their financial bona fides.

Money has not always proven determinative in past contests. For example, Romney far outspent Sen. John McCain (R-Ariz.) in the 2008 primary campaign but ultimately lost the nomination.

As the article goes on to note, however, that could prove to be different this time around for several reasons. First of all, in 2008 Barack Obama raised an astounding $ 750,000,000 by the end of the election cycle. That money allowed him to out organize Hillary Clinton during the Democratic Primaries, and to challenge John McCain in traditionally like Indiana, Virginia, and North Carolina (all of which Obama went on to win) during the General Election. This time around, some pundits are speculating that Obama could end up pulling in $1,000,000,000 by the time to 2012 campaign is over. That’s a figure that even someone like Mitt Romney is going to have trouble competing against that. Combine the Obama effect with the fact that the Republican field is so fractured right now, and it’s easy to see why a candidate who can prove their ability to raise large amounts of cash is likely to taken more seriously, even if it’s someone as wacky as Michelle Bachmann.

At the same time, it’s  important to note two important differences between Bachmann’s first quarter haul and Romney’s, one of which helps Bachmann and one of which doesn’t. Most of Romney’s money was raised through his PAC while most of Bachmann’s was raised through her Congressional campaign. If (when) Romney runs, he would be legally barred from using PAC money to benefit his own campaign whereas Bachmann would be legally entitled to transfer money from her Congressional campaign to her Presidential campaign if she ran. Of course, Romney could use to the PAC to his indirect benefit by funding other candidates who in turn support him, but it obviously isn’t the same thing. The other caveat is that the majority of Bachmann’s money was raised through direct mail, which is an incredibly costly fundraising method. When Sharron Angle raised $14,000,000 in her race against Harry Reid it cost her $12,000,000 to do it so she really only netted $2,000,000. If that ratio were to hold for Bachmann’s haul, then she’d have a pretty small amount of money in the bank. Put in perspective, then, Bachmann’s big haul isn’t really that big at all.

Nonetheless, as Allahpundit notes, underestimate Michele Bachmann at your peril. She has a base of true believers around her that are as committed as Sarah Palin’s fans are, and she has the advantage of not having made the same negative impression that Palin has on the public. at least not yet. Combine that with her personal ties to Iowa, and she could prove to be a surprise, which could be a huge problem for the GOP.