Regardless of what one thinks about gun rights, it strikes me that we can all agree that this is incredibly bad taste:

JEFFERSON CITY • A Missouri lawmaker is drawing attention for the unfortunate timing of his gun raffle fundraiser next month.

The Sunlight Foundation has posted an invitation for state Rep. John McCaherty‘s Aug. 27 fundraiser, which will feature the raffle of an AR-15 rifle. Unfortunately for the High Ridge Republican, the gun is the same model as one allegedly used in last week’s shooting at a Colorado movie theater that left 12 dead and 58 injured.

The Sunlight Foundation is a non-profit group that focuses on government transparency. The organization’s Political Party Time blog focuses on campaign social events and urges people to send event details and invitations to post.

Tickets for McCaherty’s raffle are $25 a piece, according to an event invitation that the blog posted online. The flyer also boasts that the gun is Missouri-made and only 200 tickets will be sold.

I’m sure all 200 tickets will be sold out shortly. 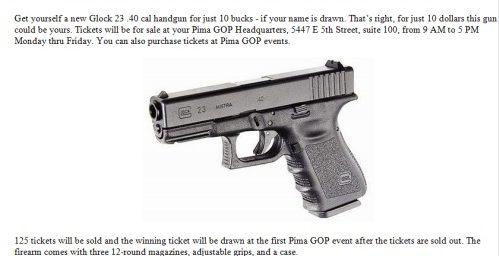