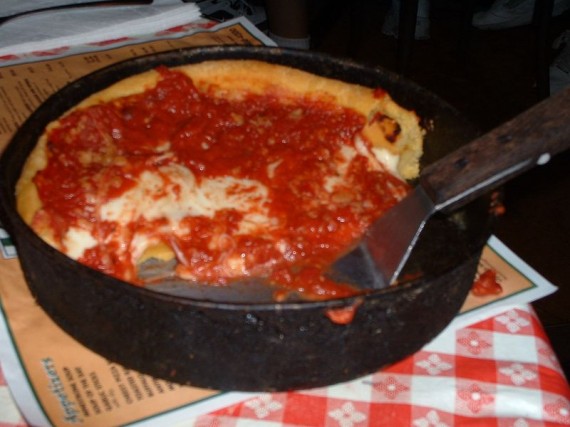 After spending the day in Chicago fundraising, Mitt Romney sat down with small business owners at Gino’s East, a pizza joint famous for their deep-dish pizza.

Not wanting any of the leftover slices to go to waste, Romney sent the remaining pies to where else but President Obama’s Chicago reelection headquarters.

Asked if the pies actually made it to Obama’s HQ, a campaign source said that they had.

In fact, Romney himself tweeted a photo of a delivery boy heading out with the loot, writing, “Great deep dish at @ginoseast. Sending the extra slices to @barackobama and his Chicago HQ team.”

The commenters on the story seem to think this was some mean-spirited prank, and perhaps it was. My instinct was to take it as a playful gesture and perfectly good use of what I presume was a lot of extra pie. Presumably, it’s mostly young kids working on the campaign at this early stage and there are few things they like better than free pizza.