Mitt Romney's campaign gives us a lesson in how not to stage a "major" economic speech. 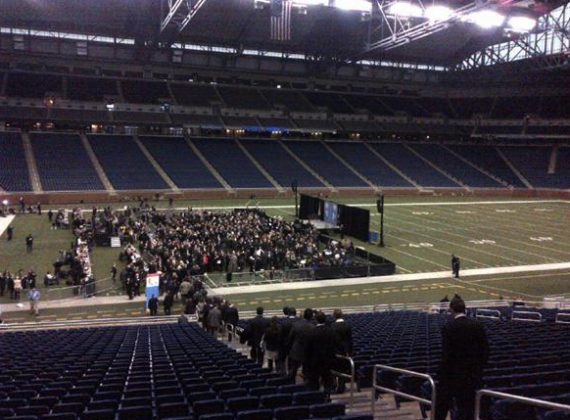 Mitt Romney gave what was billed in advance as a major economic speech before the Detroit Economic Club, but the only thing that people seemed to have noticed was the venue:

Presidential politics is all about the image that you see on television. And by that measure, Mitt Romney’s speech from Ford Field in Detroit did not look that bad.

Mr. Romney could be seen standing at a lectern in front of a backdrop that had the logo of the Detroit Economic Club. And when the audience — about 1,200 people — clapped, they filled the TV screen as cameras panned across them.

But in the age of Twitter and the Internet, that is not all that matters.

Even before the speech started, reporters began tweeting out pictures of the 65,000-seat stadium — completely empty, except for the chairs set up on the field itself, near the 20-yard line.

Row after row of empty blue seats in the huge stadium made the crowd seem minuscule, especially compared with the images of stadiums filled with screaming fans that TV viewers are used to.

And the comparisons do not stop there.

Reporters quickly started posting pictures of the stadium speeches President Obama gave at similar point in his primary campaign four years ago. One, at a stadium in Hartford, was almost filled to capacity — about 16,000 seats.

It is true that Mr. Romney’s campaign did not treat this speech as a rally, making no attempt to fill the stadium. This was an economic speech that was moved to Ford Field after the number of people who wanted to attend grew larger than the earlier location could allow.

But in politics, it is always better to show an overly crowded venue than an overly empty one. So the decision to move the event to Ford Field was an unfortunate one for Mr. Romney.

To be fair to the Romney campaign, the decision to move the venue of the speech — which was originally scheduled to take place in an indoor meeting space at the stadium that holds about 700 people — was made by the Detroit Economic Club, which sponsored the speech. Nonetheless, one would have thought that someone in Romney’s campaign would have seen what was going to happen here (the photograph above only gives a small indication of what it looked like). According to some reporters, the size of the stadium meant that anyone who wasn’t close into where Romney was speaking was subjected to the inevitable echo effect that one gets in a large, empty space. Is it really possible that the campaign couldn’t have said to the sponsor that the speech should remain indoors, just so they could avoid what looks for all the world like an embarrassing visual? I find it hard to believe that the Club wouldn’t have accommodated whatever it was the campaign wanted to do.

Leaving the visuals aside, though, the speech itself wasn’t really much of anything to write home about. The specifics of Romney’s revised economic plan had been leaked to the press (by the campaign) days ago, so there wasn’t any breaking news in the speech. Even if there had been though, Romney didn’t really get into that many specifics anyway. Instead of a major policy address to an important regional business group, it sounded like the same old stump speech we’ve been hearing for months. Romney even used the line about the trees in Michigan being just the right height, whatever that means. Then, in the middle of a paragraph about the auto industry, Romney went off script and stuck his foot in his mouth:

DETROIT — For Mitt Romney, ad-libbing is becoming a liability.

At the end of a 35-minute speech Friday to the Detroit Economic Club at this city’s football stadium, Romney offered yet another YouTube-worthy moment for his GOP rivals to exploit — reminding the well-heeled executives that his family owns four Detroit-made cars, including two Cadillacs. Though they may be made in Michigan, owning two of the pricey cars — which cost between $35,000 and $49,000, according to the campaign — will only reinforce the image that he’s out of touch with working-class Americans.

It was the latest verbal flub for a candidate who has a reputation for being over-scripted — Romney hasn’t held a press availability since Feb. 8, the day after losing Colorado, Minnesota and Missouri to Rick Santorum.

But in reality, Romney is at times surprisingly under-scripted and has gotten himself into trouble when speaking off-the-cuff.

“I love this country. Actually I love this state,” he said in Detroit Friday. “This feels good, being back in Michigan. You know, the trees are the right height. The streets are just right. I like the fact that most of the cars I see are Detroit-made automobiles. I drive a Mustang and a Chevy pickup truck. Ann drives a couple of Cadillacs, actually. And I used to have a Dodge truck, so I used to have all three covered.”

The quip — Romney’s conclusion to a crowd of 1,200 suit-clad onlookers and 65,000 empty seats at Ford Field — instantly overshadowed the news the campaign had hoped to make: Introduction of his plan to increase the Medicare eligibility age from the current 65 by one month each year.

With only three days to go until Tuesday’s competitive Michigan primary, Romney also repeated his argument that no one else in the GOP field can defeat President Barack Obama in the general election.

“I not only think I have the best chance, I think I have the only chance,” he said. “Maybe I’m overstating it a bit. … It’s always hard to defeat an incumbent president, even an ineffective one like Jimmy Carter.”

But it will be the “two Cadillacs” quip that makes the event memorable. The line instantly exploded on Twitter and was posted to YouTube by Democratic groups within minutes

Of course it will be, because it plays into the same image that Romney has tried to shed for the past year or more and the idea that he is out of touch with the concerns and experiences of average Americans. Now personally I don’t care how many cars Mitt and Ann Romney own. If they can afford them, more power to them. This is politics, however, and the worst thing a candidate can do is hand your opponent the ammunition to use against you. That’s exactly what Romney keeps doing, whether it’s this, or the line about how he likes firing people (which was taken out of context, of course), or the entire income tax issue.

The real problem for Romney, though, is that unforced errors like this — and by that I mean the bad choice of venue, the lackluster speech, and the line about the Cadillacs — chip away at the only real argument for his candidacy, the argument that he’s the best candidate to beat Barack Obama in the fall. Every time something like this happens, one has to think that even Romney supporters look at it and cringe a little at the thought of what it’s going to be like to see this guy go up against Barack Obama in the fall. Right now, Romney benefits from the fact that he’s running against three men who look, and are, much worse than him by comparison, and who would look even more ridiculous standing next to Barack Obama during the fall campaign. That’s not going to be the case after he’s the nominee, though, and one has to wonder how many Republican powerbrokers are wishing that there was someone better than Romney in the race right now.