House Speaker Hastert today said he believes Minority Leader Pelosi should ask Ethics ranking member Alan Mollohan, D-W.Va., to step aside — if only temporarily — in light of a report this morning that federal prosecutors are investigating Mollohan’s finances and whether they were properly disclosed. Hastert said he had asked former House Administration Chairman Ney to relinquish his chairmanship earlier this year when Ney was confronted with ethics questions. “I asked my chairman to step aside, that’s really up to Ms. Pelosi, that’s her choice. There’s a precedent for it,” Hastert said. Both the House Administration and Ethics committees are leader-appointed. “I was wondering why [Ethics Committee Democrats] were dragging their feet on this whole ethics thing,” Hastert said. “I don’t know if that has anything to do with it or not, we’ll see.”

National Republican Congressional Committee Chairman Thomas Reynolds of New York today also called on Mollohan to step down — and suggested Mollohan’s own issues could have contributed to the gridlock at the Ethics Committee. “It is no wonder that Mr. Mollohan and Democrat leaders have stalled for so long in getting the Ethics Committee up and running,” Reynolds said. “I believe it would be prudent at this point for Mr. Mollohan to resign from the Ethics Committee until this investigation is completed.” The Wall Street Journal reported today that an inquiry is being conducted into Mollohan’s personal financial disclosures, and raised questions about earmarks he has steered to nonprofits in West Virginia in the past five years. Mollohan has not been accused of any wrongdoing.

The report will likely ratchet up the already partisan nature of the Ethics Committee, which has been largely incapable of functioning over a number of disputes this session. Mollohan and Ethics Chairman Hastings are engaged in a public disagreement after the panel failed to agree last week to move forward with any investigations except one long-standing complaint against Rep. Jim McDermott, D-Wash. “If these serious allegations about a federal investigation are true, then Mr. Mollohan should consider stepping down from the Ethics Committee,” added a spokesman for Majority Leader Boehner. “Not doing so would jeopardize the work of the committee.” Calls to the offices of Mollohan and Pelosi were not returned at presstime.

I know very little about Mollohan and nothing about the charges beyond the report above, which is reprinted in its entirety. Both Congress Daily and WSJ are subscriber-only, unfortunately.

Stepping aside from his position on the Ethics Committee until he is either exhonorated or otherwise, though, strikes me as appropriate in light of the current climate in Congress. While one does not want to encourage a game of tit-for-tat on ethics issues, further undermining an already strained process, the Committee and its members obviously have to be above reproach.

via emailed tip from the House Republican Conference

Update: The National Legal and Policy Center has more details.

The National Legal and Policy Center (NLPC) today disclosed that it filed a 500-page Complaint on February 28 with the office of the U.S. Attorney for the District of Columbia detailing hundreds of ethics law violations by Rep. Alan Mollohan (D-W.V.).

NLPC’s investigation began when its review of the Financial Disclosure Reports of House Appropriations Committee members showed a sharp increase in Rep. Mollohan’s assets from 2000 to 2004. A closer examination revealed that Mollohan and his wife had more than $2,000,000 in real estate investments with a former staffer, Laura Kuhns, and her husband. Kuhns ran a nonprofit, Vandalia Heritage Foundation, which had received more than $28 million in appropriations earmarks with Mollohan’s help from 2000 through 2005. She was also on the board of other nonprofit groups which had received over $100 million in earmarks of federal funds during the same period with Mollohan’s help.

NLPC Chairman Ken Boehm stated, “Our research was extremely specific. When Mollohan failed to disclose an asset we would document his ownership interest with a deed, Uniform Commercial Code filing or other public record. In all, we documented over 250 misrepresentations and omissions. Every Financial Disclosure Report filed by Mollohan from 1996 through 2004 had major errors. Most of the errors had the effect of understating the value of his holdings — sometimes the assets he did not disclose exceeded the ones he did.”

“The real issue here is not whether Mollohan systematically was hiding financial and real estate assets and grossly misrepresenting their value. He was. The real issue is why he was hiding those assets. Mollohan is the Ranking Member of the House Committee on Standards of Official Conduct – popularly known as the ethics committee. He has served on that committee, which has jurisdiction over the filing of Financial Disclosure Reports, for 9 years (1985 to 1991 and then 2003 to present). No one in the House has more familiarity with the disclosure laws than he does. Any kind of excuse that he did not know how to fill out his financial disclosure reports — for a 9 year period — does not pass the straight face test.”

“The bottom line is Mollohan got very wealthy in a four year period. His account of his finances during this period is demonstrably false. The fact that he earmarked well over $100 million in tax dollars to groups associated with his business partner is about as big a red flag as one can imagine.”

The Wall Street Journal leads today with a piece on Rep. Alan Mollohan (W.Va.), the Democratic ranking member on the House Ethics Committee. Mollohan, also a member of the Appropriations Committee, has earmarked millions in funds for non-profits run by his business partner and some campaign contributors.

If this story has legs, it could muddy the Dem narrative of the GOP culture of corruption. It’s possible Mollohan accrued a quick fortune from real estate acquisitions or by improperly reporting his finances.

But his seniority on the Appropriations and ethics cmtes raises larger and fundamental questions about the use and abuse of earmarks. The timing also couldn’t be worse for Dems — with Tom DeLay’s resignation, a budget stalemate and immigration exposing fissures in the GOP.

And locally, Mollohan has a legitimate GOP opponent with strong WH backing — state Del. Chris Wakim — for the first time in a while. Could the Dems’ ethics point-man derail his own party’s ethics edge?

Even if Mollohan boldly took bribes in exchange for these earmarks–the worst possible scenario from the Democrats’ standpoint–the case would not in and of itself innoculate the GOP, which has the Abramoff-DeLay scandals brewing in Congress and various scandals, notably the Plame matter, in the White House. Unless there is something systematic along the lines of the K Street Project, one corrupt politician (assuming the allegations are true on face value) is not enough to tar an entire party. 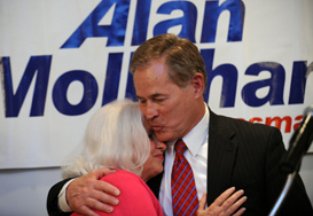