The military regime in Myanmar has sentenced two reporters to prison for reporting on the repression of the Rohingya Muslims. 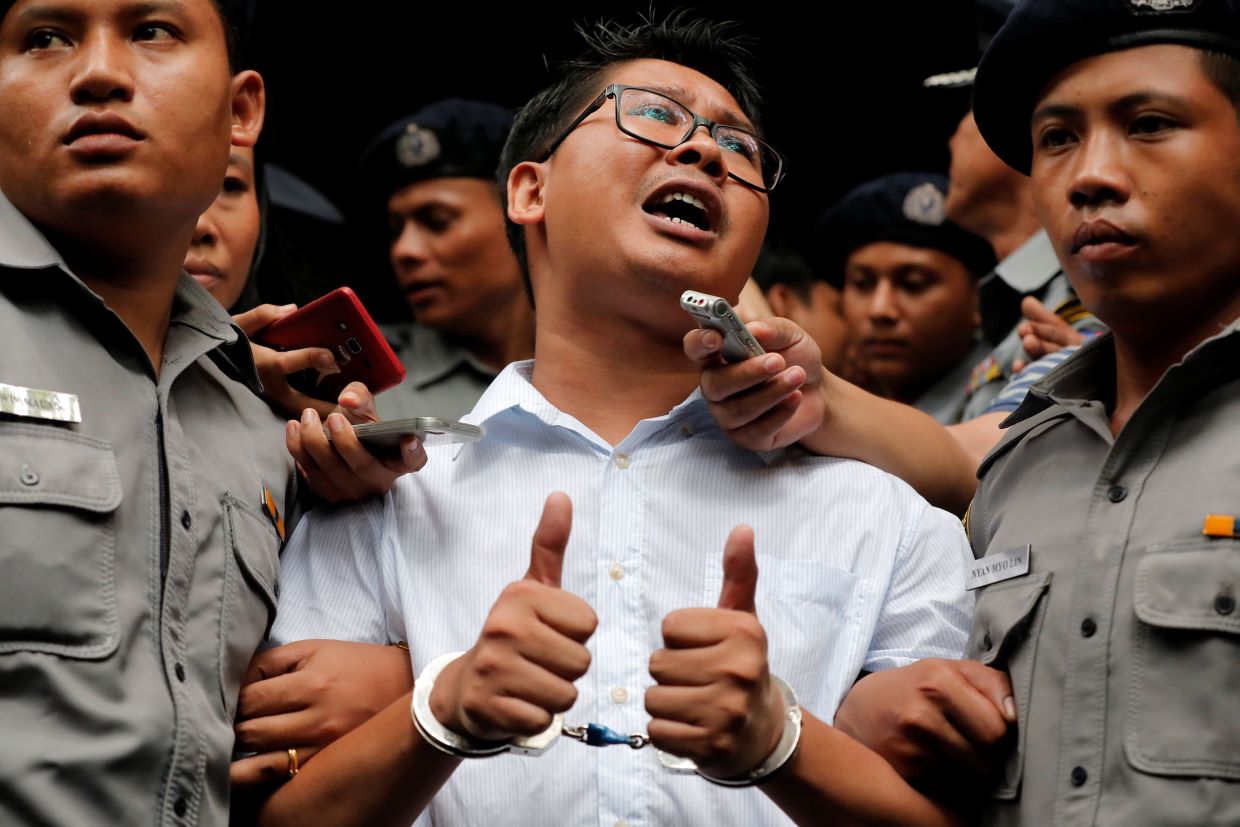 A court in Myanmar has sentenced two Reuters reporters who were covering the regime’s repression of the Rohingya minority to seven years in prison in just the latest example of the assault on freedom of the press that is becoming far too common around the world:

A Myanmar court has sentenced two Reuters journalists to seven years in prison for breaking the Official Secrets Act while investigating a massacre of Rohingya Muslims.

Wa Lone, 32, and Kyaw Soe Oo, 28, were originally detained in December 2017 after working on an investigation into the mass killing of a number of Rohingya villagers in Myanmar’s Rakhine state.

The violence was part of a conflict which the UN has described as a form of “ethnic cleansing,”with military operations forcing more than 700,000

Rohingya, a minority Muslim group, to flee Myanmar to Bangladesh.

The two journalists were charged with breaching the colonial-era act, which carries a maximum penalty of 14 years in prison, in July. The two men, both Myanmar nationals, pleaded not guilty.

The verdict was due last Monday, but the judge delayed it saying he was too ill to attend court that day.

Following the guilty verdict at the Yangon court Kyaw maintained the pair’s innocence, but added that they were unsurprised by the verdict. “We didn’t do anything wrong,” he said. “We’re not exactly shocked by the verdict.”

The reporters were bustled from the court where a small crowd of supporters momentarily blocked policemen from pushing them into a vehicle to take them back to jail.

Than Zaw Maung, a lawyer for the reporters, said: “This is disappointing (and a blow) to democracy, rule of law and press freedom.”
Both journalists testified in court that two police officers, who they had not previously met, had given them papers relating to their investigation during a meeting in a Yangon restaurant. Shortly after, they were arrested by plainclothes officers.

In April, a Myanmar police officer, Moe Yan Naing, testified that he had witnessed a plot by senior police to frame the two journalists by planting secret documents on them.

The case has been viewed as a litmus test of press freedom and democratic rights in the Southeast Asian country. Monday’s verdict prompted immediate international censure and increased criticism of Myanmar’s de facto leader, Aung San Suu Kyi, who has also faced a loss in support for her handling of the Rohingya issue.

n a statement, UN High Commissioner for Human Rights Michelle Bachelet condemned the sentence, demanding it be “quashed and for them to be released, along with all other journalists currently in detention for their legitimate exercise of the right to freedom of expression.”

The verdict has also been derided by leading European nations with France, Germany and Britain all issuing firm statements in response.

“TTrhey did nothing but support the truth in Rakhine,” said a statement issued by the German Foreign Ministry. “Their arrest and harsh punishment help to intimidate other critical and independent journalists in Myanmar.”

Following the announcement of the verdict Kyaw Soe Oo’s wife, Chit Su Win, burst into tears, according to a Reuters report.
Reuters Editor-in-Chief Stephen Adler said the conviction was “a sad day” for the organization, the two men and “the press everywhere,” adding that the verdict “must be corrected by the Myanmar government as a matter of urgency.”

“This conviction of the 2 Reuters reporters is a hammer blow against media freedom in #Myanmar, showing just how afraid the #Tatmadaw & #Myanmar government are of investigative journalism and critical commentary customarily found in a real democracy,” he tweeted, referring to the country’s military and civilian authorities.

The Myanmar government spokesman Zaw Htay did not responded to CNN’s request for comment about the verdict.

Time and again, Myanmar’s government appeared at risk of blowing its prosecution of two young journalists who had exposed a massacre of 10 Muslim men and implicated security forces in the killings.

On April 20, a prosecution witness revealed in pre-trial hearings that police planted military documents on Reuters reporters Wa Lone and Kyaw Soe Oo in order to frame them for violating the country’s Official Secrets Act. That admission drew gasps from the courtroom.

A police officer told the court that he burned notes he made at the time of the reporters’ arrest, but didn’t explain why. Several prosecution witnesses contradicted the police account of where the arrests took place. A police major conceded the “secret” information allegedly found on the reporters wasn’t actually a secret.

And outside the courtroom, military officials even admitted that the killings had indeed taken place.

These bombshells bolstered central assertions of the defense: The arrests were a “pre-planned and staged” effort to silence the truthful reporting of Wa Lone and Kyaw Soe Oo.

In the end, the holes in the case were not enough to stop the government from punishing the two reporters for revealing an ugly chapter in the history of Myanmar’s young democracy. On Monday, after 39 court appearances and 265 days of imprisonment, Wa Lone and Kyaw Soe Oo were found guilty of breaching the Official Secrets Act and sentenced to seven years in prison.

Yangon northern district judge Ye Lwin ruled that the two reporters had breached the secrets act when they collected and obtained confidential documents. Delivering his verdict in the small courtroom, he said it had been found that “confidential documents” discovered on the two would have been useful “to enemies of the state and terrorist organizations.”

After the verdict was delivered, Wa Lone told a cluster of friends and reporters not to worry. “We know we did nothing wrong,” he said, addressing reporters outside the courtroom. “I have no fear. I believe in justice, democracy and freedom.”

The prosecution of Wa Lone and Kyaw Soe Oo has become a landmark press freedom case in Myanmar and a test of the nation’s transition to democratic governance since decades of rule by a military junta ended in 2011. The military, though, still controls key government ministries and is guaranteed 25 percent of parliamentary seats, giving it much power in the fledgling democracy.

During the court hearings, U.N. Secretary General Antonio Guterres and leaders from several Western countries had called for the reporters’ release. After the verdict, Scot Marciel, the U.S. ambassador to Myanmar, said the ruling was “deeply troubling” for everybody who had struggled for media freedom in the country. “I’m sad for Wa Lone and Kyaw Soe Oo and their families, but also for Myanmar,” he said.

Reuters Editor-in-Chief Stephen J. Adler said the two reporters had been convicted “without any evidence of wrongdoing and in the face of compelling evidence of a police set-up.” The verdict, he said, was “a major step backward in Myanmar’s transition to democracy.”

The Reuters report has further extensive details about the regimes efforts to punish these reporters for reporting the truth about what has become, over the course of the past year, a human rights disaster that only shows signs of getting worse a long as the world continues to allow the regime to get away with it. The story began, of course, a year ago, when Rohingya Muslims, who make up a minority of the population of the predominantly Buddhist nation, began fleeing across the border into Bangladesh in response to reports of what amounts to ethnic cleansing and repression. The vast majority of those refugees now reside in already-crowded Bangladesh in what amounts to the world’s largest refugee camp. Many of these fleeing refugees have brought with them reports that can only be described as horrific regarding their treatment by government military and police forces, including threats of death at the hands of both official groups and civilian mobs. These events have resulted in international outrage, including a United Nations investigation that called for the country’s military leaders to be prosecuted for human rights abuses and which was also highly critical of Aung San Suu Kyi, who had previously won the Nobel Peace Prize for her efforts to end decades of military control of the nation formerly known as Burma. The report includes allegations that the Myanmar military has engaged in murder, false imprisonment, and sexual above against the Rohingya and that the crackdown was justified as a crackdown on terrorism under laws that puts military leaders above the law. It was this story of the repression of the Rohingya that the Reuters reporters were investigating when they were arrested, and it seems fairly clear that their punishment now is directly related to those efforts to bring the truth to light.

This persecution of reporters is nothing new in Myanmar, of course, and it’s nothing new for repressive regimes around the world. The past several years have seen similar legal proceedings against journalists in nations such as Egypt and Saudi Arabia, and journalists in Russia who have been critical of Vladimir Putin’s regime have ended up dead or in prison. In the past, the United States has been a strong moral voice against such repression of press freedoms, but this Administration has either been strangely silent about incidents such as this or has issued at best tepid condemnations of these repressive acts. As a result, it appears to the rest of the world as if the United States is abandoning yet another aspect of its previous role in the world as a champion for freedom of the press. If that’s the case, then repression such as this is only going to get worse.

FILED UNDER: Asia, Freedom of the Press, Myanmar, Rohingya 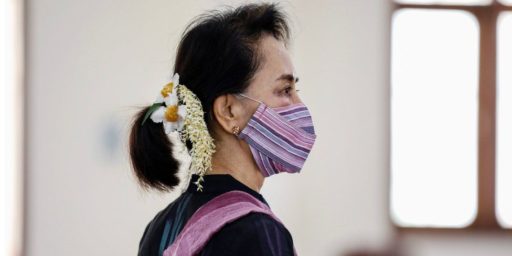