Nancy Pelosi is irritating some party stalwarts by funneling money into the campaigns of Democratic incumbents running ads against her. 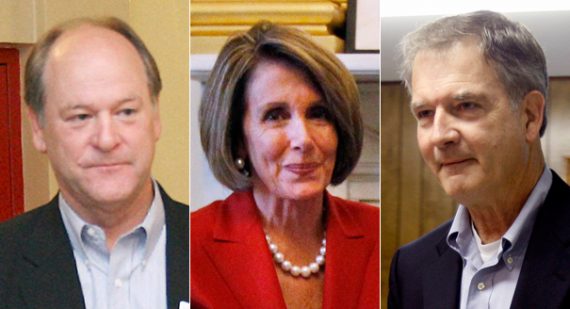 “Nancy Pelosi punishes with cash,” reads the headline of a Jonathan Allen story at Politico.

Here’s how House Democrats have punished colleagues Bobby Bright, Bill Owens and Joe Donnelly for running ads against Speaker Nancy Pelosi: With more than $2 million combined spending to keep them in their seats.

As control of the House hangs in the balance, Democrats can’t afford to play favorites with their money down the stretch run to the midterm election.

So they’ve spent money on recalcitrants, rankling the ranks of Pelosi foot soldiers who endorsed controversial components of the Democratic agenda only to find that loyalty isn’t much of a factor when determining where to spend precious campaign resources.

“The thing that really irks me is the Bobby Bright s—t,” said a Democratic strategist who has worked on numerous campaigns over the last several cycles. “What’s the point of giving money to a guy like Bobby Bright who would probably take a good deal from Republicans and switch parties after this whole thing is done anyway?”

But the money game isn’t about who played nice and who didn’t. It’s about who can win — and who among that set needs the money.

“All this is a numbers game right now,” said an influential Democratic lobbyist who is on everyone’s fundraising list. “What can we do to keep the majority?”

While Pelosi can be criticized on many fronts, she’s not an idiot.  She’s been in and around politics her entire life.   Her dad was a Congressman and mayor of Baltimore and she’s been in Democratic Party politics herself for over three decades.  She knows how the game is played.

Bright, Owens, and Donnelly are among the most vulnerable members of her caucus — which makes them desperate to separate themselves from Pelosi in their home districts — but still have a fighting chance to win.   So, of course Pelosi is going to funnel money their way to try to save their seats — which translate into a chance for her to remain Speaker.

If, somehow, these people get re-elected and Pelosi retains the Speakership, I’m sure she’ll find some subtle ways to punish* them.  But, for now, the Republicans, not disloyal Democrats, are her concern.

*UPDATE:  ”Punish” is too strong a word here for what I have in mind.  But these Members are not likely to be at the front of the line for plum committee assignments or pork projects.  She’ll treat them as necessary evils, not as up-and-comers to be groomed for the leadership.  At the end of the day, she wants them re-elected and part of the caucus; but she’s not going to go out of her way to “reward” them, either.