NATO is still seen as essential by 62 percent of both EU and U.S. respondents, demonstrating that the transatlantic military bond is still, despite a rough decade, firmly entrenched in American and European views of the world.

My latest for The Atlantic, “Despite Transatlantic Political and Economic Turmoil, NATO Endures,” has been published. An excerpt:

The German Marshall Fund has just released its annual Transatlantic Trends report, which measures U.S. and European public opinion on transatlantic issues and trends. The big headline is that a bare majority of Americans, 51 percent, now think the countries of Asia are more important to their national interests than the countries of the European Union, which only 38 percent of respondents called more important. But this change, likely driven by Asia’s economic rise and Europe’s economic decline, isn’t the only major piece of news: NATO is still seen as essential by 62 percent of both EU and U.S. respondents, demonstrating that the transatlantic military bond is still, despite a rough decade, firmly entrenched in American and European views of the world.

The strong public support for NATO is interesting precisely because it has been so steady, remaining at essentially the same levels for years now, despite the tremendous challenges it has faced: the U.S.-European tensions of the George W. Bush Bush years, the wars in Afghanistan and Iraq and Libya, and the global economic crisis. 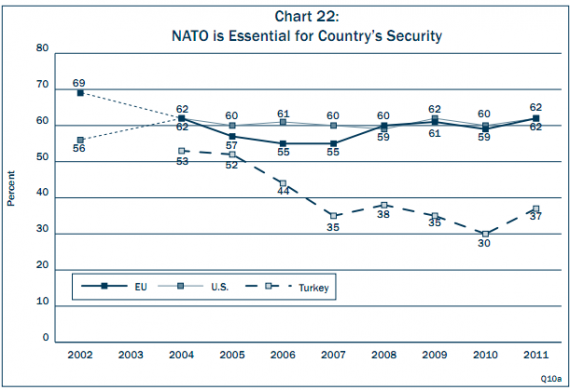 Similarly — and in rough parallel — Europeans have fluctuated in their conviction that “U.S. leadership in world affairs is desirable.” It peaked at 64 percent (2002), dropped to the mid-30s after the Iraq squabble, and rebounded to the mid-50s during the Obama years. But, through it all, the NATO numbers stayed steady.

For over six decades, NATO — the transatlantic military alliance — has been the one constant throughout ever-shifting interests, affections, and priorities. For Europeans, it’s a guarantee that the world’s dominant military power will treat an attack against them as an attack against us. For Americans, it’s a tangible partnership with those whose values we share. That the U.S. and Europe are so military close is something we just assume — and that’s a good thing.