Nelson Mandela, who has been back in the hospital for respiratory issues for almost a week now, appears to be improving:

“We are very happy with the progress that he’s now making, following a difficult few days,” Mr. Zuma said.

It was the first report of an improvement in Mr. Mandela’s condition since he was admitted to a hospital in Pretoria early Saturday morning after suffering a recurrence of a persistent lung ailment, a legacy of the tuberculosis he contracted during the 27 years he was imprisoned for opposing apartheid. His health has been frail lately, and this hospitalization was his fourth in the last seven months.

Government officials in the last few days had been more downbeat, describing Mr. Mandela’s condition as “serious but stable” with no improvement.

Mr. Mandela, 94, is being treated in an intensive care unit, where close family members have been visiting him regularly. Among them are his daughters, his former wife, Winnie Madikizela-Mandela, and his grandson Mandla Mandela. His wife, Graça Machel, canceled a speech in London to be by his side.

Mandla Mandela, who is a traditional leader in the Eastern Cape village where his grandfather was born, spoke to reporters outside Mr. Mandela’s home.

“My grandfather is the father of the nation,” he said. “He’s embraced by the global community, and we appreciate the support that we’ve received.”

Somewhat ironically, it was 49 years ago yesterday that Mandela was convicted of treason. The next day, he was sent to the prison on Robben Island, where he had been held for about a year before on other charges, where he remained until 1982 when he was transferred to a prison near Cape Town. He remained in custody for another eight years before finally being released. It was during his time on Robben Island that Mandela developed the tuberculosis that scarred his lungs for life and which have caused him to suffer lung infections throughout his life since, including the infection he is now suffering from. 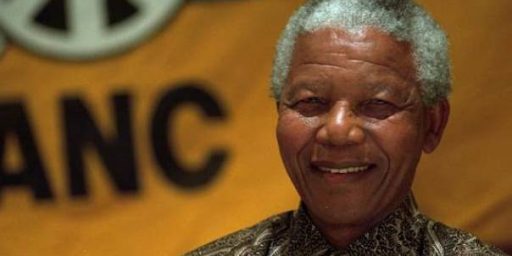