Who should bear the cost of extra policing for candidate events? 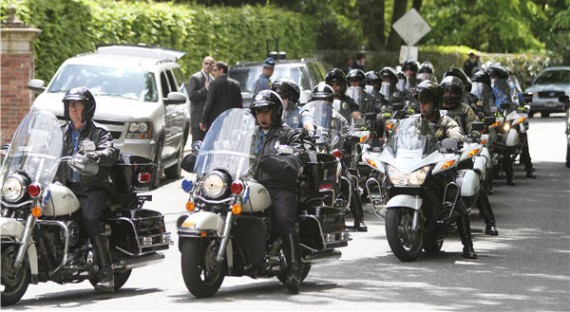 Newport Beach, California has billed the Romney and Obama campaigns for the additional security costs that their respective fundraisers cost the city. Romney has paid; Obama has not.

It’s the service that is responsible for the candidates’ security, not the campaigns, said Max Milien, an agency spokesman. Any cost concerns should be directed to the agency.

Newport Beach City Manager Dave Kiff billed the campaigns of President Obama and presumptive Republican nominee Mitt Romney for police security at their separate fundraisers this year in the city.

Now that the Romney campaign paid its bill, the city is left in the awkward position of trying to collect from Obama.

“We cannot reimburse any agencies,” Milien said. “We make that clear from Day 1.”

Milien explained that an advance team works with local law enforcement to plan road closures and other measures before a candidate’s visit. If the local agency cannot afford to pay for extra security or overtime, the local officials should inform the Secret Service ahead of time, he said.

In that case, Milien said, the Secret Service would seek help from other law enforcement groups — county or state police, for example, who would not charge for the service.

The city was “honored” to have the president in town, Kiff said, but he viewed the campaign fundraisers as private events.

“Had this been a ‘business trip’ — if the president came to Newport Beach to talk about one of his policies with our residents — the city would not have sent an invoice,” he wrote in an email.

The city’s position strikes me as reasonable. And Kiff claims that he did in fact raise these concerns with the Secret Service and was told to take it up with the campaign.

The notion that presidential fundraisers should impose an unfunded mandate on states and municipalities to provide security is absurd; it’s potentially bankrupting. Even a “business trip,” frankly, ought to be funded by the federal taxpayer, not the localities.

That said, this is the first I’ve heard of cities billing campaigns for security. If in fact this is a customary or even somewhat common practice, it would be strange, indeed, to require the opposition party’s campaign to pay for the cost of additional security while the Secret Service provides security for the incumbent at taxpayer expense. It’s bad enough that the incumbent gets ferried around in a taxpayer-funded jet and limo while the opposition has to pay for that sort of thing out of pocket; but there’s not really any way around that given the difficulty of segregating the president’s “official business” from his “campaign related activities.” Frankly, anything a first-term president does is, in some sense, related to his re-election campaign.