NFL To Ban Most Bags In Stadiums 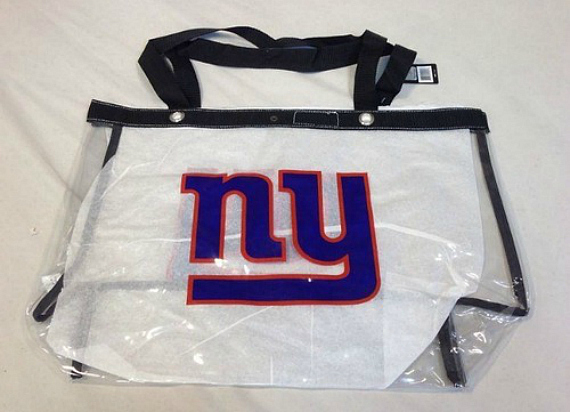 If you’re going to an NFL game this year, you better be careful what kind of bag you bring with you:

The NFL announced a change to its bag policy on Thursday and beginning with the 2013 season, only clear plastic, vinyl or PVC bags will be permitted inside NFL stadiums.

Under the new policy, fans will be allowed to bring one bag into stadiums and that bag must be clear and not exceed 12″ x 6″ x 12″ in size.

Chanel, Prada and Gucci might not be on board with the new policy, which will prohibit purses from NFL stadiums. Small clutch bags are still permitted, as long they’re no bigger than ‘the size of a hand.’

“Our fans deserve to be in a safe and secure environment,” NFL vice president and chief security officer Jeffrey Miller said in a statement. “Public safety is our top priority. This will make the job of checking items much more efficient and effective. We will be able to deliver a better and quicker experience at the gates and also provide a safer environment. We appreciate our fans’ cooperation.”

Here’s a list of items from the NFL that you will not be allowed to bring into stadiums: purses larger than a clutch bag, coolers, briefcases, backpacks, fanny packs, cinch bags, seat cushions, luggage of any kind, computer bags and camera bags or any bag larger than the permissible size.

Just to be clear: you can still bring a camera, binoculars or a tablet into the stadium, you just can’t bring any of those items in a non-clear bag.

The New York Giants bag above is an example of the kind of bag that you would be allowed to bring into the stadium. I’m not sure if this is something that only the Giants sell, or if someone is planning to make versions available with all team logos. It would certainly be another money making opportunity, which we all know the NFL cannot pass up.

Although not explicitly stated, it seems clear that this new policy is a direct result of the bombing at the Boston Marathon, where the Tsarnaev brothers transported their bombs to the site of the explosion using backpacks that one cannot see through. The only alternative to this policy, arguably, would be to put x-ray machines at every entrance to every NFL stadium which, while it may be logistically possible, would be both expensive and incredibly disruptive to the process of getting fans (many of whom wait until just before game time to get to their seats so they can enjoy tailgaiting) into the stadium. So, once again, I guess, the terrorists have won.