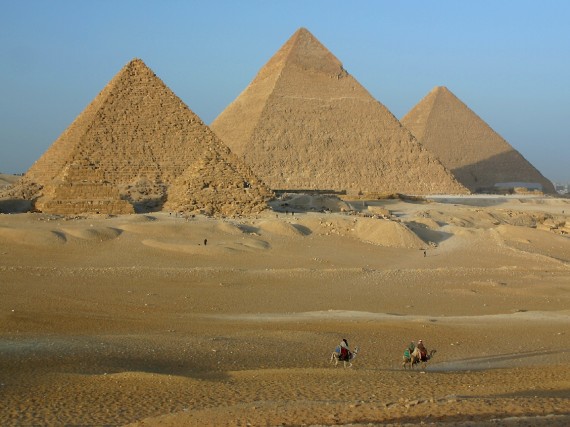 Shortly after Mohammad Morsi was officially declared the winner of the Egyptian Presidential election, a rumor has been circulating on several right wing blogs that one of the clerics in the Muslim Brotherhood had called on Morsi to destroy the Pyramids at Giza. It reminded many people of the actions of the Taliban during their years in power in Afghanistan when they destroyed many priceless and ancient Buddhist relics that dotted the Afghan land side. The story was picked up by Frontpage Magazine and a whole host of Anti-Muslim blogs, and even made its way into the mainstream American Press:

Mohammed Morsi has been Egypt’s president for less than a month and already senior clerics in his country and around the Islamic world are loudly calling for the demolition of the pyramids, Egypt’s most important tourist attraction and among the Seven Wonders of the World.

Saudi Sheik Ali bin Said al-Rabi’i called them heinous “symbols of paganism.” In recent days, similar calls have been echoing through Egypt and the region, including one from a Bahraini sheik who urged Morsi to “destroy the pyramids and accomplish what the Amr bin al-As could not.” He was referring to the Prophet Muhammad’s companion who conquered Egypt in the seventh century but didn’t have the technological wherewithal to accomplish the task.

None of this should be too surprising. Islamic extremists are now destroying 15th century tombs in Timbuktu, world heritage sites, because they are considered “idolatrous.” And remember in 2001, when the Taliban fired heavy artillery at two huge Buddha statutes carved into a rock face about 1,700 years ago. Taliban leader Mullah Omar had issued an edict against un-Islamic graven images. Numerous other examples exist, contemporary and ancient.

What’s surprising is that Morsi has had nothing to say about this, not a word. Neither has he said anything about numerous “freelance” efforts to enforce other elements of Shariah law across Egypt, even though his new government hasn’t said that’s his plan.

The obvious antecedent was the recent destruction of ancient monuments in Timbuktu by extremist Islamists who had taken over northern Mali and deemed them un-Islamic. The Taliban’s destruction in 2001 of 1,500-year-old statues of the Buddha carved into a cliff in central Afghanistan was also brought to mind. But for the most part, the pyramid story gained traction only in a relatively few outlets.

There was an Egyptian television talk show that mentioned it, but only to denounce a Saudi sheik, Ali Al Rabieei, who had been quoted in an early report as a would-be destroyer of pyramids. The sheik not only repudiated the remarks attributed to him, but also offered a reward to anyone who could tell him who had made the remarks in his name, using what he said were two phony Twitter accounts.

“These stories are cheap acts aimed at hurting Egypt and its image, and Mr. Morsi as well,” said Mr. Nur el-Din, the antiquities professor. He said Mr. Morsi had reassured Egypt’s tourism officials that the country’s antiquities were in no danger from the new government.

Younis Makhyon, a senior member of the Salafi Nour Party, said that no one from the group had ever suggested pyramidicide. “These allegations have no foundation whatsoever and no basis in reality,” Mr. Makhyon said. “They are part of an attempt to turn Islamists into scarecrows and frighten the world about them.”

On July 20, the story gained life with a commentary on Newsday’s Web site by Joel Brinkley, a professor at Stanford University and a former correspondent for The New York Times.

“Morsi has been Egypt’s president for less than a month, and already senior clerics in his country and around the Islamic world are loudly calling for the demolition of the pyramids,” Mr. Brinkley wrote.

“Morsi has had nothing to say about this, not a word,” he added.

Ahmed Sobeai, a spokesman for the Freedom and Justice Party, the Muslim Brotherhood’s political party, responded, “Dr. Morsi cannot respond to something that hasn’t happened.” Mr. Sobeai called the whole affair “an attempt to fabricate a crisis from an illusion.”

The pyramids, he said, are safe.

If nothing else, this is yet another reason why you shouldn’t believe every rumor you read on the Internet, especially when that rumor is supposedly based on what someone speaking a foreign language said.