The prosecutor who came to national prominence jumping on the #MeToo bandwagon has now been run over by it. 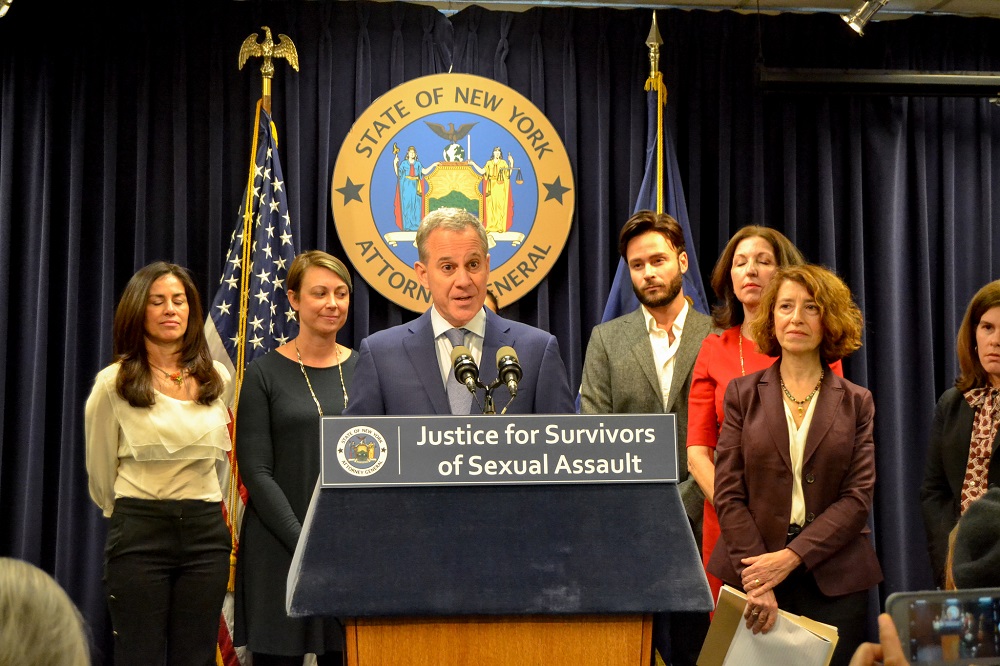 Eric Schneiderman, New York’s attorney general, has long been a liberal Democratic champion of women’s rights, and recently he has become an outspoken figure in the #MeToo movement against sexual harassment. As New York State’s highest-ranking law-enforcement officer, Schneiderman, who is sixty-three, has used his authority to take legal action against the disgraced film mogul Harvey Weinstein, and to demand greater compensation for the victims of Weinstein’s alleged sexual crimes. Last month, when the Times and this magazine were awarded a joint Pulitzer Prize for coverage of sexual harassment, Schneiderman issued a congratulatory tweet, praising “the brave women and men who spoke up about the sexual harassment they had endured at the hands of powerful men.” Without these women, he noted, “there would not be the critical national reckoning under way.”

Now Schneiderman is facing a reckoning of his own. As his prominence as a voice against sexual misconduct has risen, so, too, has the distress of four women with whom he has had romantic relationships or encounters. They accuse Schneiderman of having subjected them to nonconsensual physical violence. All have been reluctant to speak out, fearing reprisal. But two of the women, Michelle Manning Barish and Tanya Selvaratnam, have talked to The New Yorker on the record, because they feel that doing so could protect other women. They allege that he repeatedly hit them, often after drinking, frequently in bed and never with their consent. Manning Barish and Selvaratnam categorize the abuse he inflicted on them as “assault.” They did not report their allegations to the police at the time, but both say that they eventually sought medical attention after having been slapped hard across the ear and face, and also choked. Selvaratnam says that Schneiderman warned her he could have her followed and her phones tapped, and both say that he threatened to kill them if they broke up with him. (Schneiderman’s spokesperson said that he “never made any of these threats.”)

A third former romantic partner of Schneiderman’s told Manning Barish and Selvaratnam that he also repeatedly subjected her to nonconsensual physical violence, but she told them that she is too frightened of him to come forward. (The New Yorker has independently vetted the accounts that they gave of her allegations.) A fourth woman, an attorney who has held prominent positions in the New York legal community, says that Schneiderman made an advance toward her; when she rebuffed him, he slapped her across the face with such force that it left a mark that lingered the next day. She recalls screaming in surprise and pain, and beginning to cry, and says that she felt frightened. She has asked to remain unidentified, but shared a photograph of the injury with The New Yorker.

In a statement, Schneiderman said, “In the privacy of intimate relationships, I have engaged in role-playing and other consensual sexual activity. I have not assaulted anyone. I have never engaged in nonconsensual sex, which is a line I would not cross.”

Manning Barish was romantically involved with Schneiderman from the summer of 2013 until New Year’s Day in 2015. Selvaratnam was with him from the summer of 2016 until the fall of 2017. Both are articulate, progressive Democratic feminists in their forties who live in Manhattan. They work and socialize in different circles, and although they have become aware of each other’s stories, they have only a few overlapping acquaintances; to this day, they have never spoken to each other. Over the past year, both watched with admiration as other women spoke out about sexual misconduct. But, as Schneiderman used the authority of his office to assume a major role in the #MeToo movement, their anguish and anger grew.

In February, four months after the first stories about Weinstein broke, Schneiderman announced that his office was filing a civil-rights suit against him. At a press conference, he denounced Weinstein, saying, “We have never seen anything as despicable as what we’ve seen right here.” On May 2nd, at the direction of Governor Andrew Cuomo, Schneiderman launched an investigation into the past handling of criminal complaints against Weinstein by the Manhattan District Attorney, Cyrus Vance, Jr., and the New York City Police Department. (In 2015, Vance declined to bring criminal charges against Weinstein, saying that he lacked sufficient evidence—a decision criticized by activist groups.) In a speech, Cuomo explained that “sexual-assault complaints must be pursued aggressively, and to the fullest extent of the law.” The expanding investigation of the Weinstein case puts Schneiderman at the center of one of the most significant sexual-misconduct cases in recent history.

Schneiderman’s activism on behalf of feminist causes has increasingly won him praise from women’s groups. On May 1st, the New York-based National Institute for Reproductive Health honored him as one of three “Champions of Choice” at its annual fund-raising luncheon. Accepting the award, Schneiderman said, “If a woman cannot control her body, she is not truly equal.” But, as Manning Barish sees it, “you cannot be a champion of women when you are hitting them and choking them in bed, and saying to them, ‘You’re a fucking whore.’ ” She says of Schneiderman’s involvement in the Weinstein investigation, “How can you put a perpetrator in charge of the country’s most important sexual-assault case?” Selvaratnam describes Schneiderman as “a Dr. Jekyll and Mr. Hyde” figure, and says that seeing him lauded as a supporter of women has made her “feel sick,” adding, “This is a man who has staked his entire career, his personal narrative, on being a champion for women publicly. But he abuses them privately. He needs to be called out.”

Manning Barish notes that many of her friends attended the N.I.R.H. luncheon. “His hypocrisy is epic,” she says. “He’s fooled so many people.”

A second report, “Ex: Schneiderman called me his ‘brown slave,’ would slap me until I called him ‘Master’,” appeared in the New York Post last evening.

It didn’t take long for Schneiderman’s allies to abandon him and for him to resign his post.

Eric T. Schneiderman, the New York State attorney general who rose to prominence as an antagonist of the Trump administration, abruptly resigned on Monday night hours after The New Yorker reported that four women had accused him of physically assaulting them.

“It’s been my great honor and privilege to serve as attorney general for the people of the State of New York,” Mr. Schneiderman said in a statement. “In the last several hours, serious allegations, which I strongly contest, have been made against me.

“While these allegations are unrelated to my professional conduct or the operations of the office, they will effectively prevent me from leading the office’s work at this critical time. I therefore resign my office, effective at the close of business on May 8, 2018.”

His resignation represented a stunning fall for a politician who had also assumed a prominent role in the #MeToo movement.

Mr. Schneiderman, 63, denied abusing the women, saying in a statement: “In the privacy of intimate relationships, I have engaged in role-playing and other consensual sexual activity. I have not assaulted anyone. I have never engaged in nonconsensual sex, which is a line I would not cross.”

But not long after the allegations were made public, many of his allies, including Gov. Andrew M. Cuomo, who like Mr. Schneiderman is a Democrat, called for him to step down.

“My personal opinion is that, given the damning pattern of facts and corroboration laid out in the article, I do not believe it is possible for Eric Schneiderman to continue to serve as attorney general,” Mr. Cuomo said.

The call was echoed by Senator Kirsten E. Gillibrand, who led the charge to oust Al Franken from the Senate. “The violent actions described by multiple women in this story are abhorrent,” she said in a statement. “Based on this extensive and serious reporting, I do not believe that Eric Schneiderman should continue to serve as attorney general.”

Under New York’s Constitution, Mr. Schneiderman’s replacement will be selected by the State Assembly and Senate by joint ballot — effectively placing the decision in the hands of the Assembly, which has many more members.

The #MeToo movement that emerged in the wake of Harvey Weinstein scandal has opened the floodgates of women who had feared going public with claims of sexual harassment and worse. While mostly a good thing, a long-overdue reckoning for those who serially abused their positions of power, there have been reasons for concern. The movement wound up lumping together everything from serious crimes and truly repugnant behavior to social awkwardness and lame jokes. And the pendulum swung too far, going from presuming women who made these charges were probably lying or at least partially to blame for the abuses they suffered to presuming those accused guilty. I have mixed feelings, for example, over whether Al Franken was treated fairly.

There are no reasons to believe Schneiderman is a victim, however. The New Yorker report, by Jane Mayer and Ronan Farrow, goes into substantial detail about the allegations, which are gruesome, detailed, and indicative of a pattern. Four women made these claims independently. Many of the claims were made contemporaneously with the abuses, years before the #MeToo bandwagon began rolling.