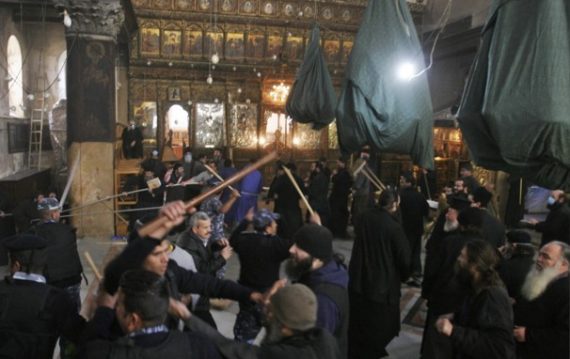 The Christmas spirit didn’t last very long at the Church Of The Nativity, the church built on the site where most Christians believe Christ was born:

At one of oldest churches in the world, built over the cave that tradition marks as the place Jesus was born, Franciscan, Greek Orthodox and Armenian priests have brawled annually around Christmas Day for more than a century.

This year was no different.

Scuffles between the rival groups of priests broke out during a cleaning of the church in preparation for Orthodox Christmas on Jan. 7. The BBC reportsthat about 100 priests fought with brooms as tourists looked on, until Palestinian police broke up the clashes. No one was seriously injured, and there were no arrests.

“No one was arrested because all those involved were men of God,” Bethlehem police Lt. Col. Khaled al-Tamimi told Reuters. Tamimi called the incident “a trivial problem that . . . occurs every year”

In past years, the priests have brawled over who owns which altars, passageways and chandeliers, and how to do repairs, according to news accounts. In 2010, the fight broke out while priests were trying to repair the church’s rotting, collapsing roof.

Via Rod Dreher, here’s some video:

This is all the more silly considering that the doctrinal differences between these groups, especially between the Orthodox and Catholic communities, are relatively minor when you get right down it.