Obama And Romney In Dead Heat In New Virginia Poll

Virginia could be the state that decides who controls the United States Government. 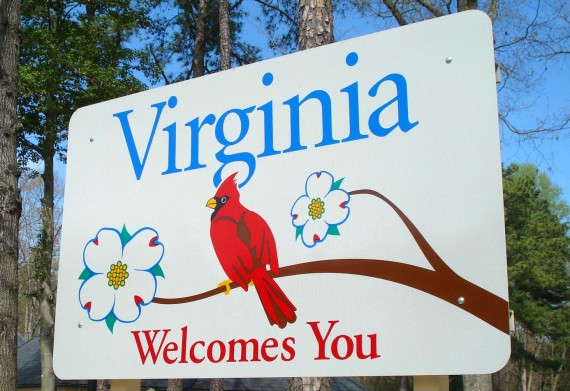 Depending on which electoral scenario, Virginia is either the one state that could decide the election or one of three states that could decide the election along with Ohio and Florida. After being reliably Republican in Presidential races every year from 1968 to 2004, the state went for Barack Obama by a six point margin in 2008 and it’s going to be a heavily contested state this year. According to a new Quinnipiac Poll, the race in the Old Dominion is tight as a drum:

President Obama and Mitt Romney are deadlocked in the critical battleground of Virginia, according to a new Quinnipiac University poll released early Thursday that shows that Obama’s slight advantage in the commonwealth is gone.

Obama and Romney each attracted 44 percent of the vote in the survey. Ten percent of voters prefer another candidate or are undecided.

The poll represents a significant tightening of the race from surveys this spring that showed Obama ahead. In early June, Obama led by 5 points; in mid-March, his lead was 8 points.

The two candidates each retain more than 90 percent of their respective party bases: Obama wins 92 percent of Democrats, while Romney holds 91 percent of Republicans. Among independents, Obama leads by a statistically insignificant 2 points. Obama led independents by 8 points in the June poll and by 3 points in March.

The president wins just one-third of white voters, compared with 55 percent for Romney. Among white voters without a college degree, Obama is at just 29 percent versus 57 percent for the Republican. In June, Obama attracted 37 percent of the white vote. In March, he was at 36 percent among whites.

Most interestingly, a full 51% of those surveyed disapprove of the job the President is doing and his favorability rating is under 50%. At the same time, though, Romney is viewed favorably by 39% of those surveyed and unfavorably by 42%. One caveat about this poll may be the fact that its percentage of white voters is slightly higher than previous Quinnipiac poll, and slightly higher than the percentage of white voters who participated in the 2008 election. Nonetheless, it suggests that the trend we had seen earlier in the year, where the President was starting to open a gap in the state, has started to reverse itself. Of the four most recent polls before Quinnipiac, only Public Policy Polling showed anything other than an tight race for Virginia’s 13 Electoral Votes.

Here’s the trend from RealClearPolitics: 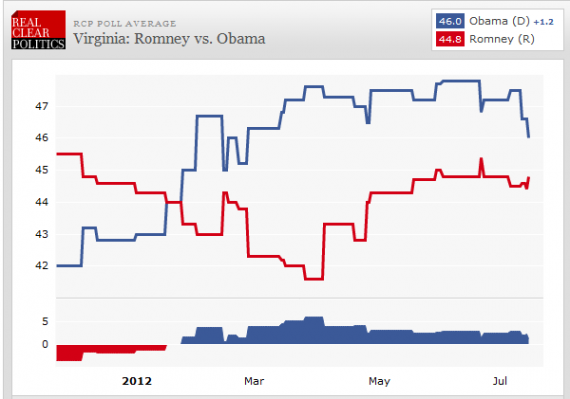 Quinnipiac University has conducted eight surveys in Virginia over the past 13 months, and for the eighth time, they find former Republican Sen. George Allen and former Democratic Gov. Tim Kaine within the margin of error in the race for the commonwealth’s open Senate seat, according to the latest poll released Thursday.

Allen leads Kaine in the new poll, 46 percent to 44 percent, within the poll’s margin of error of plus-or-minus 2.4 percentage points. Eleven percent of voters prefer another candidate, say they wouldn’t vote or are undecided.

Kaine wins 87 percent of Democrats, while Allen holds 92 percent of Republicans. The two are effectively tied among independents, with Kaine marginally ahead, 44 percent to 42 percent.

The poll does show a modest rise in Kaine’s negatives, as GOP outside groups have launched TV ads attacking his record as governor and later chairman of the Democratic National Committee. In early June, 44 percent of voters had a favorable opinion of Kaine, compared to 28 percent who had an unfavorable opinion. But, in the new poll, 43 percent view Kaine favorably, while 34 percent view him unfavorably.

Here’s the RCP chart for the Senate race, which shows that the average gap between the two men has almost never been higher than two points: 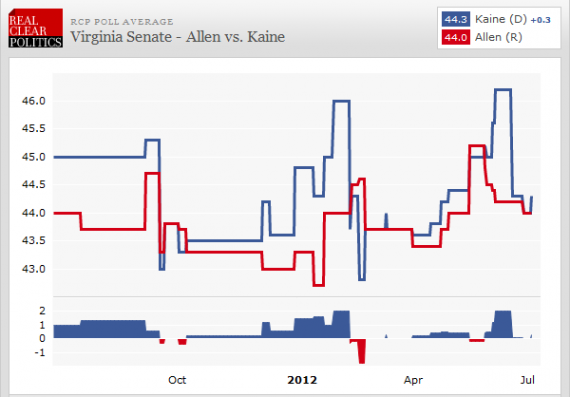