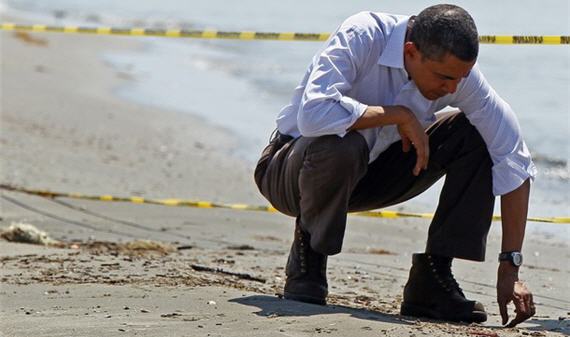 My default position on disasters is that presidents get far too much blame for not doing enough when, usually, there’s little that they can do.   With minor quibbles here and there, that’s been my view of the Gulf oil spill.    This report from Houston Chronicle business columnist Loren Steffy may change my mind:

Three days after the explosion of the Deepwater Horizon in the Gulf of Mexico, the Dutch government offered to help.  It was willing to provide ships outfitted with oil-skimming booms, and it proposed a plan for building sand barriers to protect sensitive marshlands.  The response from the Obama administration and BP, which are coordinating the cleanup: “The embassy got a nice letter from the administration that said, ‘Thanks, but no thanks,’” said Geert Visser, consul general for the Netherlands in Houston.

Now, almost seven weeks later, as the oil spewing from the battered well spreads across the Gulf and soils pristine beaches and coastline, BP and our government have reconsidered.  U.S. ships are being outfitted this week with four pairs of the skimming booms airlifted from the Netherlands and should be deployed within days. Each pair can process 5 million gallons of water a day, removing 20,000 tons of oil and sludge.

At that rate, how much more oil could have been removed from the Gulf during the past month?

The uncoordinated response to an offer of assistance has become characteristic of this disaster’s response. Too often, BP and the government don’t seem to know what the other is doing, and the response has seemed too slow and too confused.

Federal law has also hampered the assistance. The Jones Act, the maritime law that requires all goods be carried in U.S. waters by U.S.-flagged ships, has prevented Dutch ships with spill-fighting equipment from entering U.S. coastal areas.

“What’s wrong with accepting outside help?” Visser asked. “If there’s a country that’s experienced with building dikes and managing water, it’s the Netherlands.”

Even if, three days after the rig exploded, it seemed as if the Dutch equipment and expertise wasn’t needed, wouldn’t it have been better to accept it, to err on the side of having too many resources available rather than not enough?

BP has been inundated with well-intentioned cleanup suggestions, but the Dutch offer was different. It came through official channels, from a government offering to share its demonstrated expertise.

Many in the U.S., including the president, have expressed frustration with the handling of the cleanup. In the Netherlands, the response would have been different, Visser said. There, the government owns the cleanup equipment, including the skimmers now being deployed in the Gulf.  “If there’s a spill in the Netherlands, we give the oil companies 12 hours to react,” he said.  If the response is inadequate or the companies are unprepared, the government takes over and sends the companies the bill.

While the skimmers should soon be in use, the plan for building sand barriers remains more uncertain. Louisiana Gov. Bobby Jindal supports the idea, and the Coast Guard has tentatively approved the pro-ject. One of the proposals being considered was developed by the Dutch marine contractor Van Oord and Deltares, a Dutch research institute that specializes in environmental issues in deltas, coastal areas and rivers. They have a strategy to begin building 60-mile-long sand dikes within three weeks.

That proposal, like the offer for skimmers, was rebuffed but later accepted by the government. BP has begun paying about $360 million to cover the costs. Once again, though, the Jones Act may be getting in the way. American dredging companies, which lack the dike-building expertise of the Dutch, want to do the work themselves, Visser said.  “We don’t want to take over, but we have the equipment,” he said.

This is a breaking story and the presentation a bit overwrought, so let’s wait and see what the administration response is before getting too excited.   But, offhand, this looks bad.

Certainly, the president could have shown leadership in ordering a waiver of the Jones Act or demanding its repeal or amendment.

As to the fact that the Netherlands government has a plan for this and we don’t, I’m not terribly surprised.   It’s a small, maritime and riverine country surrounded with oil drilling.  But you’d sure think taking advantage of an ally’s offer of assistance would have made sense, not only in terms of the spill itself but for building better relations with Europe.  Given the scale of our economies, it’s rare that the Netherlands can bail us out.  Why not let them when the opportunity arises?