President Obama is supporting the UN Declaration on the Rights of Indigenous Peoples. Is this the end of America? 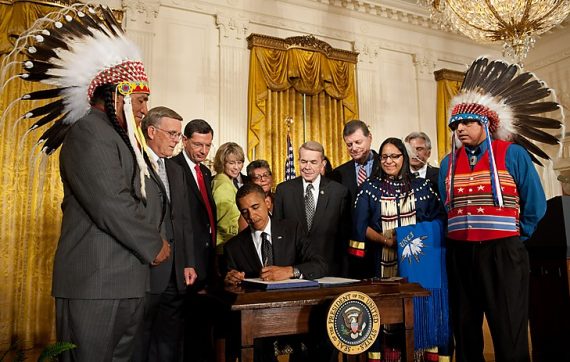 Those of you over a certain age may remember the 1980s sitcom “Family Ties” and its lovable protagonist Alex P. Keaton, played by Michael J. Fox.  There was an exchange in which another character was decrying America’s poor treatment of the Indians and Keaton retorted something to the effect, “So, do you want to give it back?”

President Obama likes the “U.N. Declaration on Rights of Indigenous Peoples.” He says it can “help reaffirm the principles that should guide our future.”

The State Department added helpfully that although the declaration is not legally binding, it “carries considerable moral and political force and complements the president’s ongoing efforts to address historical inequities faced by indigenous communities in the United States.”

This declaration – which carries”considerable moral and political force,” don’t forget – contains this little gem of a paragraph, in Article 26:

In other words, President Obama wants to give the entire land mass of the United States of America back to the Indians. He wants Indian tribes to be our new overlords.

That stupid son of a bitch!  Has he not considered the consequences?

Wonkette’s Jack Stuff and LGF’s Charles Johnson belittle Fischer’s concern for America’s future but offer little reassurance that our Kenyan born secret Muslim president isn’t going to trade the country away for $24 worth of beads and trinkets.

I’m left, therefore, to the mercy of Google.

The United Nations Declaration on the Rights of Indigenous Peoples, adoted by the General Assembly more than three years ago, says what Fischer says it does.  And it says all manner of other things that, while consistent with our current moral principles, would be absurd if applied retroactively.   Fortunately, after all the affirmations, recognitions, proclamations, and  acknowledgements, followed by 45 Articles that say very nice things, we come to the final article.  It negates all the others:

1. Nothing in this Declaration may be interpreted as implying for any State, people, group or person any right to engage in any activity or to perform any act contrary to the Charter of the United Nations or construed as authorizing or encouraging any action which would dismember or impair, totally or in part, the territorial integrity or political unity of sovereign and independent States.

2. In the exercise of the rights enunciated in the present Declaration, human rights and fundamental freedoms of all shall be respected. The exercise of the rights set forth in this Declaration shall be subject only to such limitations as are determined by law and in accordance with international human rights obligations. Any such limitations shall be non-discriminatory and strictly necessary solely for the purpose of securing due recognition and respect for the rights and freedoms of others and for meeting the just and most compelling requirements of a democratic society.

3. The provisions set forth in this Declaration shall be interpreted in accordance with the principles of justice, democracy, respect for human rights, equality, non-discrimination, good governance and good faith.

Emphases mine. Recall that the United Nations is a body chartered under the principle of state sovereignty.  The people who passed this Declaration are representatives of its 192 member states.  Rather clearly, then, the Declaration was not intended to give non-state actors — indigenous groups living inside state borders — power over states.  Thus far, 143 countries have voted in favor.

Another clue in this regard is that the Declaration was issued by the UN General Assembly.   It’s quite literally nothing more than a debating society.  Each of the 192 states has equal voting power and the right to bring up matters.  But anything passed by the assembly is nothing more than a recommendation.  Indeed, that’s what the State Department announcement [PDF here] meant when it stated “The United States supports the Declaration which–while not legally binding or a statement of current international law–has both moral and political force [emphasis mine].”

Nonetheless, concerns over the ambiguity of the language is what caused the Bush Administration to withhold its approval.   Ditto, initially, Australia, Canada, and New Zealand — other notable countries with similar concerns.   All of them have since signed.  ABC reports,

The US about-face came after officials determined that the language would, in fact, not conflict with US law and the complex relationship between national, state and tribal governments. Officials said they waited until a formal comment period for soliciting tribal input had expired before making the move to support the declaration.

“We think it is an important and meaningful change in US position,” said State Department spokesman PJ Crowley. “Of course, as with any international declaration we have certain reservations which we will voice reflecting our own domestic and constitutional interest. The president thinks it’s the right thing to do… Even though it is legally non-binding we think it carries considerable moral and political force.”

So, what’s the point?

Well, it’s an affirmation of existing American and international principle.  While states have sovereignty, there’s been a growing consensus in recent decades that aboriginal groups–such as our 565 federally recognized Indian tribes,  Native Hawaiians, and Aleuts–should be given a wide berth in preserving their native customs, language, legal systems and so forth. Indeed, it’s established in the United States Constitution that the tribes have a high degree of sovereignty on internal matters.  (That’s why, for example, Indians can establish casinos on tribal lands contrary to the law of the states in which they happen to reside.)

So, is this just empty political symbolism?   Pretty much.  What matters is what concrete policy steps we’re going to take.  And President Obama announced some of those at the time he said we’d sign this Declaration.

Our strategy begins with the number one concern for all Americans right now — and that’s improving the economy and creating jobs.  We’ve heard time and again from tribal leaders that one of the keys to unlocking economic growth on reservations is investments in roads and high-speed rail and high-speed Internet and the infrastructure that will better connect your communities to the broader economy.  That’s essential for drawing capital and creating jobs on tribal lands.  So to help spur the economy, we’ve boosted investment in roads throughout the Bureau of Indian Affairs and the Indian Reservation Road Program, and we’ve offered new loans to reach reservations with broadband.

And as part of our plan to revive the economy, we’ve also put billions of dollars into pressing needs like renovating schools.  We’re devoting resources to job training — especially for young people in Indian Country who too often have felt like they don’t have a chance to succeed.  And we’re working with you to increase the size of tribal homelands in order to help you develop your economies.

I also want to note that I support legislation to make clear — in the wake of a recent Supreme Court decision — that the Secretary of Interior can take land into trust for all federally recognized tribes.  (Applause.)  That’s something that I discussed yesterday with tribal leaders.

We’re also breaking down bureaucratic barriers that have prevented tribal nations from developing clean energy like wind and solar power.  It’s essential not just to your prosperity, but to the prosperity of our whole country.  And I’ve proposed increasing lending to tribal businesses by supporting community financial institutions so they can finance more loans.  It is essential in order to help businesses expand and hire in areas where it can be hard to find credit.

Another important part of our strategy is health care.  We know that Native Americans die of illnesses like diabetes, pneumonia, flu — even tuberculosis — at far higher rates than the rest of the population.  Make no mistake:  These disparities represent an ongoing tragedy.  They’re cutting lives short, causing untold pain and hardship for Native American families.  And closing these gaps is not just a question of policy, it’s a question of our values — it’s a test of who we are as a nation.

There’s quite a bit more in the speech.  But this is pretty benign stuff:  We’re going to help the tribes improve their infrastructure, schools, and health care.

Giving the land that we stole from them fair and square back?  Not so much.

FILED UNDER: General, Outrage of the Day