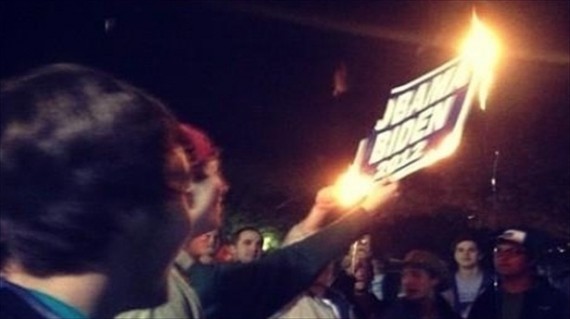 Not everyone was thrilled about the idea of Barack Obama being re-elected, especially not some students at Ole Miss:

JACKSON, Miss. — A protest at the University of Mississippi against the re-election of President Barack Obama grew into crowd of about 400 people with shouted racial slurs as rumors of a riot spread on social media. Two people were arrested on minor charges.

The university said in a statement Wednesday that the gathering at the student union began late Tuesday night with about 30 to 40 students, but grew within 20 minutes as word spread. Some students chanted political slogans while others used derogatory racial statements and profanity, the statement said.

The incident comes just after the 50th anniversary of violent rioting that greeted the forced integration of Ole Miss with the enrollment of its first black student, James Meredith.

Ole Miss Chancellor Dan Jones promised an investigation and said “all of us are ashamed of the few students who have negatively affected the reputations of each of us and of our university.”

On Wednesday night, about 700 people held up candles and called for racial harmony outside the administrative building at the university in Oxford, countering Tuesday’s protest over Obama’s re-election.

Police were initially alerted to Tuesday’s uproar by people who saw Twitter posts about it. The students were told to leave, but about 100 came back later. One person was charged with public intoxication and another with failure to comply with police orders. There were no reports of injuries or property damage.

Rumors about the situation were fueled on Twitter after the university’s student journalists posted a video referring to the gathering as “riots.” The student newspaper posted a video of the crowd, but much of what the students said in it is unintelligible other than the “Hotty Toddy” cheer, which is common at football games and other school gatherings.

One picture that spread rapidly on social media shows people burning an Obama campaign sign, but the university hasn’t confirmed that the picture was taken on campus. The chancellor said some photos shared on social media showed things that were not seen by police on campus, but the reports of uncivil language and racial slurs appeared to be accurate.