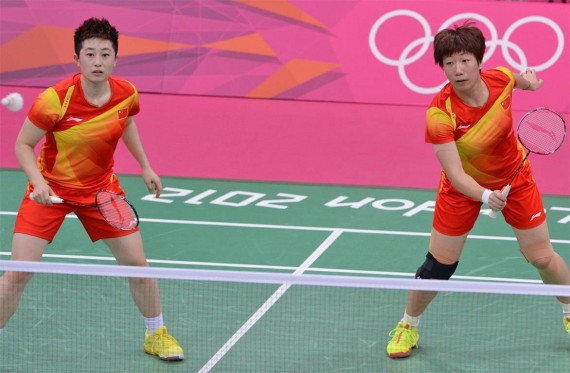 Eight badminton players have been disqualified from further participation in the Olympics after they tried to throw games in order to set themselves up for easier matches in the second round:

LONDON — Badminton officials took the extraordinary step of tossing out four pairs of women — two from South Korea and one each from China and Indonesia — for deliberately trying to lose their preliminary matches Tuesday night, the latest judging controversy to sweep through the Olympics.

The decision came less than a day after the final matches in the preliminary rounds of the women’s doubles, where the players — all of whom had qualified for the quarterfinals — tried to throw their matches so they could face an easier opponent in the next round.

The shocking disqualifications threw the tournament into turmoil and prompted protests and calls for rule changes. Korea and Indonesia have appealed the decision, and officials hoped to rule on the appeal soon. All four sets of players were supposed to play Wednesday.

Thomas Lund, the secretary general of the Badminton World Federation, the sport’s governing body, said that the four sets of women violated the Players’ Code of Conduct, Sections 4.5 and 4.6, for “not using one’s best efforts to win a match” and “conducting oneself in a manner that is clearly abusive or detrimental to the sport.”

The federation determined at a disciplinary hearing that the players in two separate matches tried to serve into the net and hit shots out of bounds. Their play led to hoots and catcalls from the packed house at Wembley Arena, with some fans yelling, “Off, off, off.” In one match, a Danish umpire warned the players that they could be thrown out by flashing a black card, a rare action in the sport.

The disqualified players are Wang Xiaoli and Yu Yang from China, the top-ranked women’s doubles pair, who lost Tuesday to the South Korean team of Jung Kyung-eun and Kim Ha-na, who were also disqualified. The players were presumed to be trying to lose because neither wanted to face the second-ranked women’s pair of Tian Qing and Zhao Yunlei in the quarterfinals.

Ha Jung-eun and Kim Min-jung of South Korea and Meilana Jauhari and Greysia Polli of Indonesia were also thrown out for lackluster play in a later match Tuesday.

Even before the disqualifications, the matches Tuesday triggered hand-wringing throughout the sport. This is the first Olympics to include preliminary rounds in which four teams play one another once to determine who will advance to the knockout stage. The extra preliminary round was designed to give all teams — including those from weaker countries that might have been knocked out after one match under the old rules — a chance to play at least three times.

All four pairs who played Tuesday had secured spots in the quarterfinals, so jockeying for an opponent — not winning or losing — was the imperative.

Because the Chinese so dominate the sport and are so numerous in the tournament, they have an incentive not to play one another when possible. And because they are so good, teams from other countries do their best to avoid the Chinese until they have no choice.

Throwing matches has been a persistent problem, and some players and officials have accused the Chinese of being the worst offenders.

Niels Nygaard, the president of the national Olympic committee in Denmark, which has the strongest badminton players in Europe, applauded the federation’s decision and pointed the finger not at the athletes, but their coaches.

“For me, it’s really a matter of principle whether things are done in a correct way,” Nygaard said after the announcement, which was made in a packed conference room at the arena. “I don’t think it’s the rule that’s the problem. It might be the leaders behind trying to tell the athletes to do something like this. It’s the same in doping cases.”

Appeals have been filed by the South Koreans and Indonesians, but it’s unclear how or when those will be heard before the tournament continues. After seeing a report about this on the news this morning, it was clear that something had to be done, though. It wasn’t just that these players were playing weaker than they normally would in order to lose, they were making it obvious by doing things like deliberately hitting the shuttlecock into the net or missing it even though they clearly had an easy shot for a return volley. Perhaps if they hadn’t made it quite so obvious, they might have gotten away with it.