On the Appropriation of National Symbols

Trump's withdrawal of his invitation to the Philadelphia Eagles is just another example of his populistic nationalism. (And it isn't healthy). 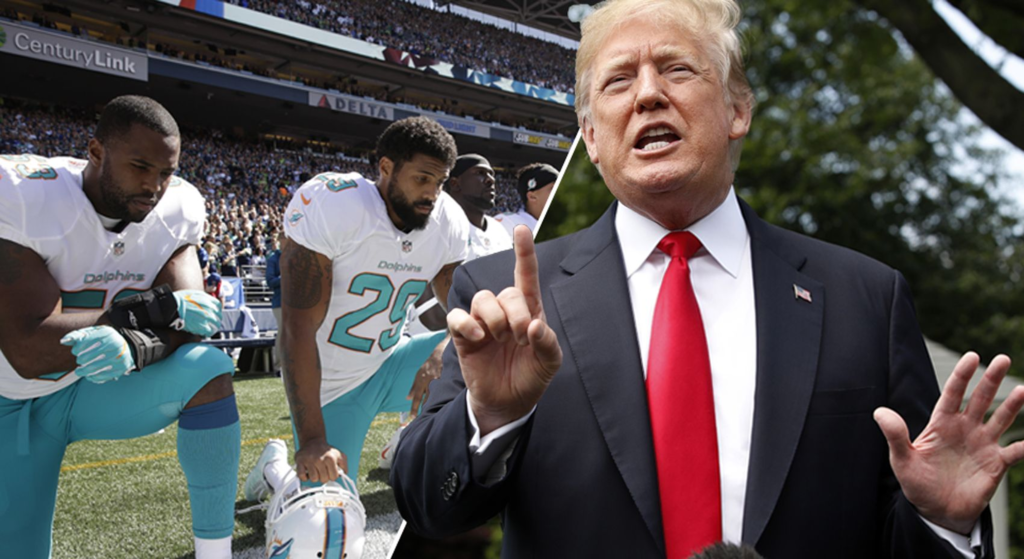 My ongoing concern with the politics of the National Anthem, as practiced by Donald Trump, is that he seeks to subvert what should be a shared national symbol into a partisan, if not personal, one.  This is especially true when there is a legitimate debate about how other citizens (e.g., some NFL players) are interpreting and utilizing that symbol (quietly kneeling to protest, and therefore draw attention to, a legitimate issue, police violence against African-Americans in particular).

Here is the President’s official statement disinviting the Philadelphia Eagles from a White House visit from the start of this week:

The Philadelphia Eagles are unable to come to the White House with their full team to be celebrated tomorrow. They disagree with their President because he insists that they proudly stand for the National Anthem, hand on heart, in honor of the great men and women of our military and the people of our country. The Eagles wanted to send a smaller delegation, but the 1,000 fans planning to attend the event deserve better. These fans are still invited to the White House to be part of a different type of ceremony—one that will honor our great country, pay tribute to the heroes who fight to protect it, and loudly and proudly play the National Anthem. I will be there at 3:00 p.m. with the United States Marine Band and the United States Army Chorus to celebrate America.

The statement, though brief, has a couple of telling portions.

First is “They disagree with their President.”  Is it not the right of all citizens to disagree with elected officials?  Should elected officials punish citizens (in this case by rescinding an honor) because they disagree with them?  This is not a democratic stance, but a personalistic, and indeed, authoritarian stance.  It is also ironic in the context of Trump’s alleged respect for the symbols of the flag and the Anthem–because he is really making it about himself.

Second, “one that will honor our great country, pay tribute to the heroes who fight to protect it, and loudly and proudly play the National Anthem.”  I think it is problematic to constantly be equating respect for national symbols as being nothing more that homage to the coercive power of the state.  I mean no disrespect to the military here, but the notion that patriotism is always, if not only, about the military and military actions is to reduce patriotism to a crass militarized nationalism.  This is also the stuff on an authoritarian mindset. The flag, the Anthem, and other national symbols do not simply represent US military activity.  Further, the notion that our freedoms only exist because of military action is ahistorical and ignores, with grand irony, the role of protests and other civic activities (among other things) in the protection and cultivation of our freedoms.

And really, it is this latter point that galls me the most about Trump’s position:  it tries to define what a patriotic, free, American looks like and does.  Such constraints undercut the notion of freedom–especially in the context of a such a quiet, respectful action as kneeling in silence.  It isn’t as if the players have been disruptive in some fashion or acting in a way to deny other citizens the right to respond to the Anthem and flag as they see fit.  Freedom, by definition, entails some level of choice in one’s actions.

Now, it is clear that the majority of the Philadelphia Eagles organization has political disagreements with Trump, and did not wish to attend.  What is unclear is the degree to which it was about the Anthem, especially since none of the Eagles kneeled this year, save one player in the preseason who did not make the team (although Malcolm Jenkins did raise his fist in protest during part of the season) .

Because only a small number of the team wished to attend the White House Press Secretary announced “the President decided to change the event so that it would be a celebration of the American flag with Eagles fans and performances by United States Marine Band and the United States Army Chorus.”

In terms of why Trump did this, the best explanation is that he didn’t want to be embarrassed by having a handful of players show up for the photo op, so he preemptively canceled the event and tried to make it into more about the National Anthem (as he did earlier this year with the NBA champion Golden State Warriors).  Trump’s motivations are also linked to the fact that he learned he could get a rise out of a friendly crowd by citing the NFL anthem protests.  This was evident at his rally in Alabama (to support the ill-fated candidacy of Luther Strange for the GOP Senate nomination)

“Wouldn’t you love to see one of these NFL owners,” wondered the president, “when somebody disrespects our flag, to say, ‘Get that son of a bitch off the field right now, out. He’s fired. He’s fired!’ ” The hypothetical was met with cheers from the assembled crowd.

There does not appear much in this life that Donald Trump loves more than being cheered by a crowd, so it is not surprising that he is sticking to this issue.  It reminds me of “drain the swamp”–a phrase he initially thought was silly,  but when he realized the crowd loved it, he kept saying it:

“They had this expression, ‘drain the swamp,” and I hated it. I thought it was so hokey. I said, ‘That is the hokiest — give me a break. I’m embarrassed to say it.’

“I couldn’t believe it. And then, the next speech, I said it again. And they went even crazier. ‘We will drain the swamp.’ … And every time I said it, I’d get the biggest applause. And after four or five times, I said, ‘Boy, what a great expression. I love saying it. You know?’ (Laughter.) It’s amazing. It really is amazing. “

Now, reports are that the White House thinks that the NFL/anthem issue could help the GOP in the mid-terms:

A source close to the White House says the President plans to continue to pound the NFL National Anthem issue through the midterms.

Another person familiar with his thinking says Trump has touted this issue before as something that could help him in the midterms, and wants to keep it in the bloodstream.

So, at its roots, the whole NFL/anthem issue is at least in part (and likely in whole) pure cynicism.  Indeed, since Trump seems not to know the words to either The National Anthem or God Bless America, it is difficult to see this whole situation as anything other than pure cynicism (at best, he hardly comes across as an enthusiast of patriotic songs in the linked clips).

To sum up Trump’s actions:  pettiness (with those who don’t adore him) plus cynicism (as it pertains to his supporters)–both of which held together by the glue of ego and the need for adulation.

However, none of this is especially surprising in terms of Trump the man.  The real danger and problem here is the degree to which he is tapping into a raw, crude nationalism. This is a danger because it is a subversion of national symbols that are supposed to be about abstract principles that illustrate national values.  To allow the president (any president) to turn a specific reaction to national symbols into a kind of loyalty or respect test is highly problematic, especially when a key lyric from the Anthem is “land of the free.”

Don’t get me wrong:  Trump has every right to have an opinion on this topic.  He even has the right to state that he thinks players should stand during the Anthem.  The problem with his position is that he is showing zero respect for the positions of his fellow citizens, to the point that he has called them “son[s] … of bitch[es],” recommended their firing, and even suggested they should leave the country.  Further, he has cynically manipulated national symbols for his personal political gain.

As with most things Trump, his behavior is not the surprising part, or, ultimately, the most concerning part.  The most concerning part are those who enthusiastically support this behavior.  This support is disturbing because it means either a) one has not really given any of this much thought (which I would suggest a rethink), b) a crass partisan acceptance of this position because he is on the right team (and not the football kind), or c) one actually support authoritarian, personalized, nationalism.

(Or, perhaps, one falls into the category of persons interviewed in this Politico piece.  Read to the very end.)

None of this is healthy.  It is divisive and counterproductive and it is disturbing to have it promoted by the President of the United States.   As I said on Twitter a few days ago:  “Mindless adoration of symbols to the detriment of the values they are supposed to represent is a pathway to authoritarianism and the loss of rights.”

Further symbols need to be shared and promoting partisan polarization in this arena is a highly irresponsible action by a president.