Take a good look at that dollar coin, because you're unlikely to see it circulation any time soon. 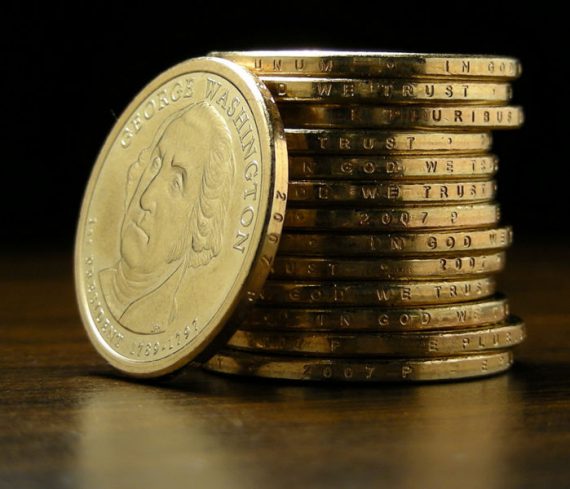 Today’s Washington Post reports that yet another attempt by the Federal Government to get people to stop using paper currency is failing:

How many $1 coins have you seen in circulation?

Since the Presidential $1 Coin Program launched in 2007, I have received just one during a commercial transaction. The cashier apologized profusely while passing me a tarnished coin bearing a likeness of John Quincy Adams. She told me she just wanted to get rid of it.

The Presidential $1 Coin Program is the federal government’s latest attempt to create a circulating $1 coin. To give the series the best possible chance of success, the authorizing legislation provided numerous measures to increase awareness and remove barriers to circulation.

By and large these measures have failed, as Americans continue to embrace paper currency. Louise L. Roseman, director of the division of reserve bank operations and payment systems, told Congress last month that “transactional demand for $1 coins has not increased materially since the start of the Presidential $1 Coin Program and overall demand continues to come primarily from collectors.”

Despite the lack of demand, the U.S. Mint has produced approximately 2 billion of the golden-colored $1 coins, with production continuing at about 500 million coins per year. This includes the four different $1 coins released each year featuring former presidents, plus one more annual design for the separate Native American $1 Coin Program.

As of May 31, the Federal Reserve Banks had nearly 1 billion $1 coins stockpiled in their inventory. The amount continues to grow with each $1 coin released and is expected to reach 2 billion by the end of the program.

This is the third time in 30 years that the Mint has attempted to get the American public to use a dollar coin. For two years starting in 1979, Americans were introduced to, and soundly rejected, the Susan B. Anthony Dollar. Then in 2000, the government came back with the Sacageawea Dollar, which failed largely because it wasn’t compatible with vending machines and the cost of converting the machines was too expensive. And, for the past three years, we’ve had the Presidential Dollar Coin, which, despite being widely unused still gets minted:

The obvious question is: If there is little transactional demand for the coins and an enormous stockpile already exists, why does the Mint continue to produce the coins in such great quantities?

The answer has to do with a legislative requirement of the coin program that was intended to ensure an adequate supply for commerce. By law, the Board of Governors of the Federal Reserve System must ensure that each design of the presidential $1 coin series released is available to financial institutions during an introductory period. To meet this requirement, the reserve banks are compelled to order new $1 coins from the Mint four times per year. The Mint diligently produces these. Quantities of the new $1 coins ordered by the Federal Reserve and not requested by financial institutions, as well as quantities that are ordered and then redeposited, continually add to the reserve banks’ inventory of $1 coins.

So, basically, there are vast quantities of dollar coins of at least two different varieties being minted that nobody uses.

The reasons for the failure seem rather obvious. First of all, carrying around, say, twenty dollars worth of dollar coins is a lot more inconvenient than a carrying around the same amount of money in paper currency. Second, people just don’t use cash of any kind as much as they used to. Credit cards and debit cards are both ubiquitous and far more convenient than either coins or paper for most transactions. If I can swipe my debit card to buy that Diet Coke at 7-11, why worry about how much cash is in my pocket ?

Of course, there’s one way the Mint could virtually guarantee that dollar coins end up in circulation, and that would be to follow the example of Canada, which eliminated the paper dollar after introducing the Canadian Dollar Coin in the 1980s. I’m not quite sure why this has never been tried in the United States, although I’m sure there’s some political, or pork barrel, reason behind it.

There is some good news, though, because it turns out the Federal Government actually “makes money” each time in mints a dollar coin that never gets used:

The Mint has been generating substantial “profits” from the production and stockpiling of unnecessary $1 coins. Each time a manganese brass disc of metal gets stamped into a legal-tender dollar, the Mint earns seigniorage based on the difference between the costs of production and the face value. In the most recent fiscal year, seigniorage earned through the production of $1 coins was $318.7 million, accounting for 63.5 percent of the Mint’s total seigniorage and net income.

Well, at least it’s something.