The Chicago Style Edition OTB Caption ContestTM is now over.

The Chicago Style Edition OTB Caption ContestTM is now over. 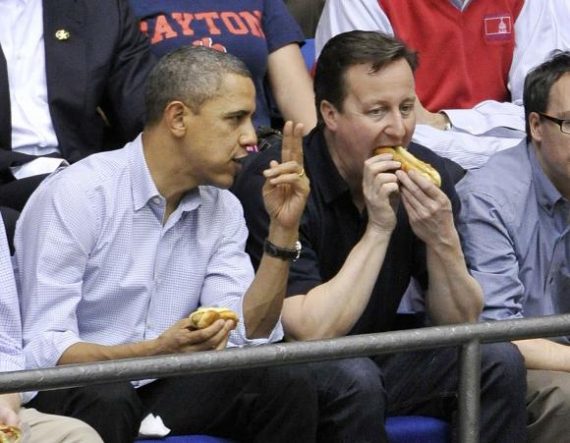 Second: Jenos Idanian – “Mr. President, that’s not how the ‘V for Victory’ gesture goes. When you turn it around, it has an entirely different meaning.”

Third: Neil Hudelson – “No, No, you forgot the war of 1812. TWO times we’ve kicked your limey asses out of our country.”

Gollum – “Well, you’re no Michele Bachmann, is all I can say.”

Drew – I know in your football you get one point for a goal. In our basketball why is basket is worth two points? I don’t know, I guess it’s just convention, like the way we count Democratic votes in Illinois or something.

Wyatt Earp – Ever since I called for a “new tone,” this is the only way I can flip people off.

John Burgess – “”Two, just two more. Anything else and Michelle will really have my ass.”

Don’t BogartBachmann that dog, save some for me.

Obama: What part of the dog did you get?

…and if Michelle sees us you’ll have to eat mine too.

“Thank you for the wonderful time Mr. President, my last photo op with Putin was more like an outtake from an episode of Survivor.”

The Monday Contest has finally found a good head.