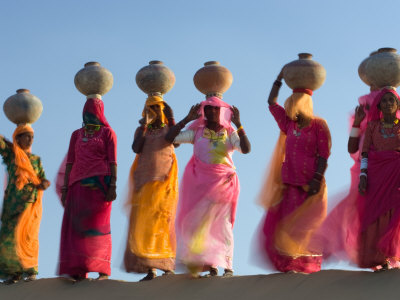 First: tom p – Something tells me the wet t-shirt contest is going to be a disappointment.

Second: michael reynolds – Up next, Dancing With The Jars.

MikeM_inMd – Colors by Benetton, subjugation by ……

John425 – So one female porter asks the other: “When are they going to learn that “B’wana” means stupid?”

The Monster – This is the dawning of the Age of Aquarius

Disney Lover – Be… Our… Guest, Be our guest, Put our service to the test…

Six more jobs created and or saved since the Libyan intervention.

I thought each would have two jugs

Isn’t that Klinger in the middle.

…and this week from Kleinfelds of New Delhi — Say Yes To Duress.