The Flip The Bird Edition OTB Caption ContestTM is now over.

The Flip The Bird Edition OTB Caption ContestTM is now over. 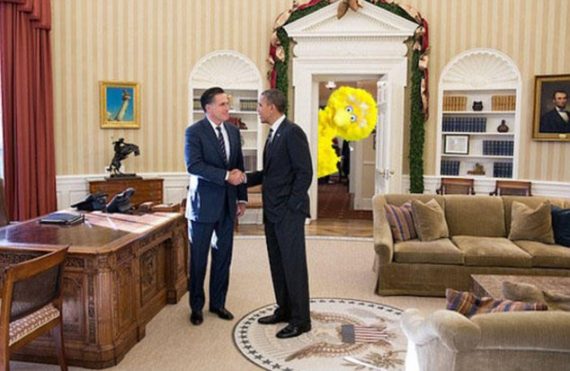 First: cd6 – – This post election shellacking white house visit was brought to you by the number 47 and the letters F and U

Second: Doug Mataconis – “No Mitt, I don’t need a reverse mortgage on the place.”

OzarkHillbilly – Instead of the Secret Service, it was Big Bird who saved the Presidency from the attempted coup.

mantis – “I thought we were having Turkey.”

JKB – “Why no, Mitt, I don’t have any millionaire entertainers hiding in the back room.”

CSK – “Nyah, nyah, Mitt. He pardoned me on Thanksgiving.”

“No, we don’t use the word ‘Rotisserie’ around here much anymore.”

Mitt: “I still feel something was fowl about the election result.”

“OK, You grab the head, and I’ll grab the feet… We’ll get Biden out of that costume somehow.”

Big Bird: “Hey! Is that turkey here to meet you yet Mr. President?”

BOTTOM OF THE BARREL GUEST APPEARANCE — OzarkHillbilly: The surprise meeting that Obama arranged between Mitt and Big Bird did not go well as Big Bird pecked Mitt’s eyes out. It didn’t make much difference tho as even when Mitt still had eyes he was unable to see the bleedingly obvious.

The Thursday Contest has already given up on the other white meat.