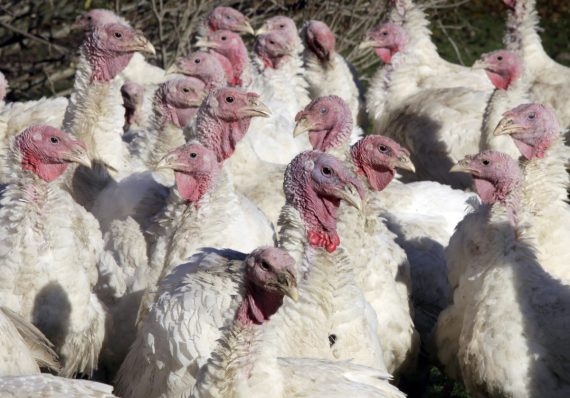 In today’s New York Times Mark Forsyth explains why America’s favorite Thanksgiving feast is named after a nation that straddles Europe and Asia:

Once upon a time, English mealtimes were miserable things. There were no potatoes, no cigars and definitely no turkey. Then people began to import a strange, exotic bird. Its scientific name was Numida meleagris; its normal name now is the helmeted guinea fowl, because it’s got this weird bony protuberance on its forehead that looks a bit like a helmet. It came all the way from Madagascar, off the southeast coast of Africa, but the English didn’t know that. All the English knew was that it was delicious, and that it was imported to Europe by merchants from Turkey. They were the Turkey merchants, and so, soon enough, the bird just got called the turkey.

But that’s not the turkey you’ll be serving with cranberry sauce and pumpkin pie. As I said, that’s an American bird. When the Spanish arrived in the New World they found a bird whose scientific name is Meleagris gallopavo. But the Spaniards didn’t care about science. All they cared about was that this bird was really, really delicious. It tasted well, it tasted just like turkey, only better.

They started exporting the birds to Europe, and soon enough they arrived on English dinner tables at just about the same time that the English were setting up their first colonies in America. The Pilgrims didn’t care about any subtle distinctions. They just tasted this great bird and thought, turkey. That’s the way the English language goes.

That’s why the bird you’re going to eat is named for a country on the Black Sea. Other languages don’t make the same mistake. They make different ones. In France it’s called dinde, because they thought it was from India, or, in French, d’Inde. And in Turkey a lot of people thought that, too, so it’s called Hindi.

That’s where the phrase let’s talk turkey comes from. Let’s do real business. Then, in the early 20th century, people got even tougher and started saying “Let’s talk cold turkey.” And then when people tried the toughest way of giving up drugs they went cold turkey.

I don’t know about you, but I’ll be filing this under something new I learned today, and it’s yet another example of the odd ways in which language sometimes evolves.

Update: For those wondering, it is true that modern day Turkey was the seat of Ottoman Empire until the end of World War One. However, the use of the name “Turkey” to refer to the nation among Europeans was quite common long before then.

Update #2: As it turns out, Bob Krulwich covered this topic on NPR about three years ago:

First, in the 1500s when the American bird first arrived in Great Britain, it was shipped in by merchants in the East, mostly from Constantinople (who’d brought the bird over from America).

If a product came to London from the far side of the Danube, Londoners labeled it “Turkey” and that’s what happened to the American bird. Thus, an American bird got the name Turkey-coq, which was then shortened to “Turkey.”

Or…Theory No. 2 (and maybe both theories are correct): Long before Christopher Columbus went to America, Europeans already had a wild fowl they liked to eat. It came from Guinea, in Western Africa. It was a guinea fowl, imported to Europe by, yes, Turkish merchants. It was eaten in London. So it got the nickname Turkey coq, because it came from Constantinople.

When British settlers got off the Mayflower in Massachusetts Bay Colony and saw their first American woodland fowl, even though it is larger than the African Guinea fowl, they decided to call it by the name they already used for the African bird. Wild forest birds like that were called “turkeys” at home.

The point is for 500 years now, this proud (if not exactly brilliant) American animal has never had a truly American name.

So, you can blame the Brits for all this.