The There's an App For That Edition OTB Caption ContestTM is now over.

The There’s an App For That Edition OTB Caption ContestTM is now over. 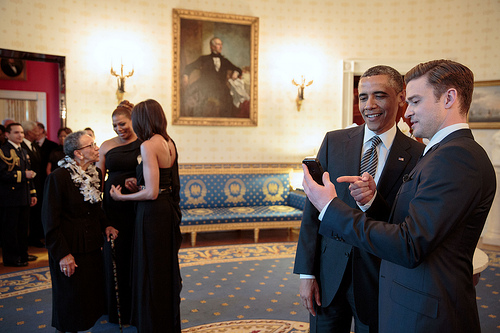 Second: Doug Mataconis – “Mr. President, with our new app, you can launch a drone strike from your smartphone with the touch of a button”

Third(tie): markm – “With this app Mr. President, you can actually get current news of what is going on in your own administration……”

Third(tie): He who must not be named – We have so much in common, I used to do a lot of Mickey Mouse crap too.

Allan Bourdius – Awww look! Chris Christie winning you a teddy bear is all over YouTube already!

Donna Tobia – A smart phone…no buttons like Blackberry. There’s even a teleprompter app!

al-Ameda – “They made an app to access the Nairobi Birth Certicate archives?”

“I’m using Travelocity to get a discount on the Lincoln Bedroom.”

Justin: “This is a pic of the portrait of Michelle you had commissioned?”
Barry: “Yea… but you’ll need to turn the screen sideways for full effect.”

“…any tee times open for tomorrow?”

“So the dancing girl just takes my eyes off which cup the pea is under?”