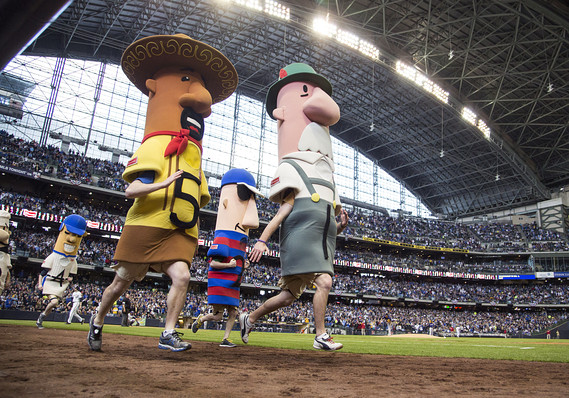 A lot of good entries for the Wiener Race… Some are recognized below. The rest are still worthy of being perused

First: Stormy Dragon – No matter how far behind he got, Carlos Danger refused to drop out of the race.

Second: Tony w – Alert Republicans quickly shot the foreigner and the game was allowed to resume.

Third(tie): al-Ameda – the undocumented chorizo is going to win

Third(tie): JWH – The baseball game drew controversy this week with its pregame Running of the Stereotypes.

Pinky – They were fierce rivals, but it was their love affair that rocked the 2014 Olympics.

Allan Bourdius – Quick! The Pittsburgh pierogies are getting away! Faster! Faster!

John Burgess – Alex Rodriguez did find a way to remain in baseball. Or the stadium, anyway.

He who must not be named – Because the giant vulva races only confused everyone.

Obama: If I had a wiener… it would look like one of these.”

The kind of sausage fest the Russians feared the Olympics might become.

The Bratwurst was disqualified as he slid into the umpires buns.

You had me at Condiment…

The Monday Contest is already tooting its own horn.