The Happiness Is A Warm Finger Gun Edition OTB Caption ContestTM is now over.

The Happiness Is A Warm Finger Gun Edition OTB Caption ContestTM is now over. 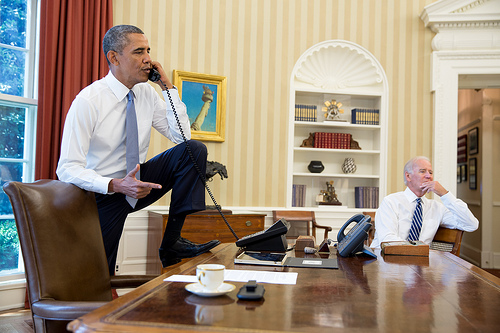 First: gVOR08 – But John, I really need that authorization to use force in Syria. You’d do it for Randolph Scott.

Second: OzarkHillbilly – Biden: “Hmmmmmm, he never drinks a second cup of my coffee.”

Third: Robert W. Armijos – After the WikiLeaks scandal and the Snowden incident, President Obama takes no chances and activates the Cone of Surveillance Cone of Silence.

Pinky – “Joe, yes, I’m trying to make a call. It’s important…yes, Joe, I’ve noticed that the room isn’t a circle. Vladimir, can you hold on a second? No, Joe, I don’t know why they made it an oval….I’m sorry, Vladimir, are you still there?”

He who must not be named – Look at this crease, how can you not be impressed by it?

Allan Bourdius – Biden (to himself): “Should I tell Barack he just split the crotch seam of his trousers? Naaaah.”

Jenos Idanian #13 – In order to make himself seem tougher, President Obama adapts the Captain Morgan pose. Joe Biden is forced to bite his own hand to keep from laughing.

Biden: (thinking) “Crap, This is gonna be a long one… His six shooter analogy’s got 57 bullets in it.”

Obama: “Hillary… is your refrigerator running?”
Biden: “Gets her every time.”

The Thursday Contest has already swabbed the deck.