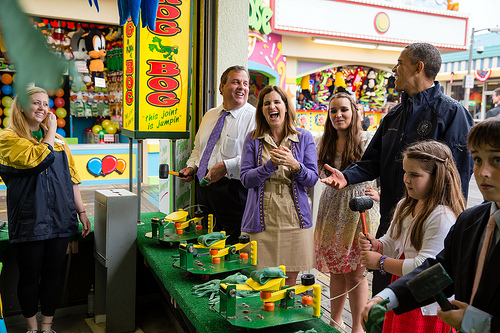 First: al-Ameda – “See, I told you Chris, the morons in the House can’t shut THIS down.”

Second: He who must not be named – Cry havoc! And let slip the frogs of war.

Moosebreath – So, Governor, which of the frogs do you think resembles Cory Booker the most?

CSK – The bystanders cheered when the young girl on the right demonstrated an efficient way to deal with Anthony Weiner’s, uh, problem.

Paul Hooson – “Surprised to not see you over at the ultra-bacon burger booth.”

“Ya know… We’re getting paid to do this.”

Obama: “I don’t need no stinkin’ hammer, I got Harry Reid to whack stuff for me.”

Obama: “Hey where’d my hammer go?”
Christie: “You lost it on your back swing. Don’t worry in only hit Biden on the head.”

The Thursday Contest already has its head in the sandmud.