The Pressing The Flesh Edition OTB Caption ContestTM is now over.

The Pressing The Flesh Edition OTB Caption ContestTM is now over. 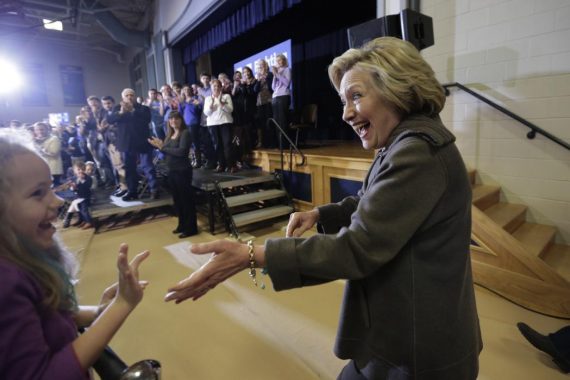 First: Franklin – Dammit, why isn’t my spidey-web coming out?!?

Second: Paul Hooson – Hillary thinks to herself, “Donald Trump’s attacks are starting to work. I need a bigger smile to act like nothing’s wrong…”

Third: RockThisTown – “I haven’t had this much fun since dodging sniper fire!”

edmondo – Hillary greeted the little girl with open arms because she was the only female in the audience who hadn’t been groped by Bill- yet.

markm – Child: “…HILLARY….Hillary…I was just looking for pointers on setting up a closet mounted server in another state….aaaaand why is that creepy silver haired guy looking at me?”.

Kid: “I wasn’t even born when you were relevant.”

It rubs the lotion on its skin, or it gets deposed again.

The years have not been kind to Martin Short.

The event was best summed up when Christopher Walken voiced, “There’s no F’in way I wanted that much cow belle.”