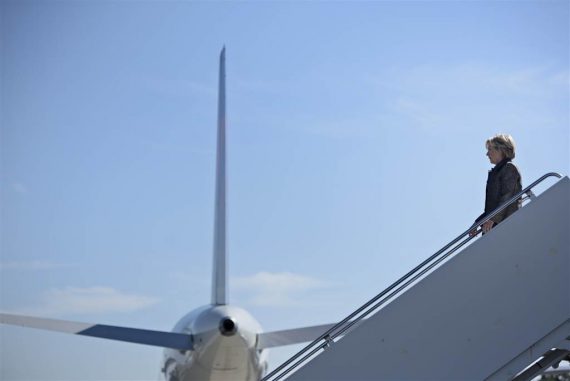 First(tie): DrDaveT – In which Hillary Clinton bravely pretends that she comes with no baggage.

First(tie): Hal_10000 – Observers were surprised that Clinton appeared unruffled by the violent backwash of the jet, but then remembered she’s spent three hours debating Trump.

Second: RockThisTown – In this photo obtained from a classified e-mail, Hillary dodges sniper fire as she exits her plane during Operation Tailhook.

Third: john430 – Hillary: “I’m gonna tax the rich so that everyone can have a jet plane just like mine.”

al-Alameda – “… the stairway to heaven goes down?”

Tony W – Trump’s campaign plane, true to the character of its owner, wiggles its ass at Hillary Clinton as she arrives for a campaign rally.

Mu – “This portable escalator was worth every penny”

Paul Hooson – Is her broom broken?

Presidential campaign: Two go in, one comes out.

(DING) You are now free to moan about the country.