The The Good, The Bad and The Ugly Edition OTB Caption ContestTM is now over.

The The Good, The Bad and The Ugly Edition OTB Caption ContestTM is now over. 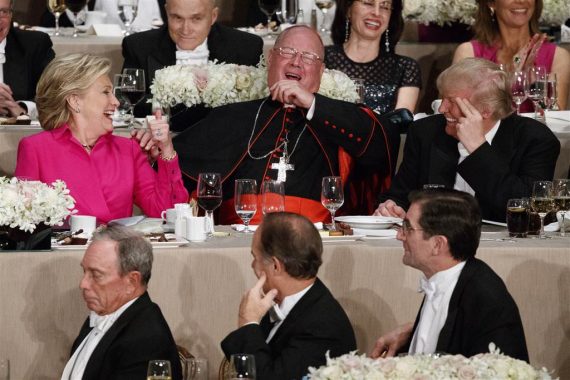 First: Franklin – Bloomberg: Damnit I should have run.

Second: CSK – “We call ourselves ‘The Aristocrats.'”

Third: Mary Gehman – “…So, what is the going price of a soul these days?”

fustian – Hillary tells the old joke about how to get a nun pregnant. — Dress her as an altar boy!

Michael – And then the Rabbi says to the Priest, “Beats the hell out of ham, doesn’t it?”

barbintheboonies – Let me get this straight THE BOTH OF YOU ARE CHRISTIAN. Stop it your killing me.

Paul Hooson – One is a Cardinal, while the other two are only cardinal sins…

pylon – “So the nun says ‘A prostitute? Thank God, I thought you said a Protestant.””

al-Alameda – “Do priests use Viagra or birth control?
What the hell kind of questions is THAT?””

Aelio – You may now kiss the bride.

A Cardinal, a donkey and an elephant walk into a bar…