The Yes, We Done. Edition OTB Caption ContestTM is now over.

The Yes, We Done. Edition OTB Caption ContestTM is now over. 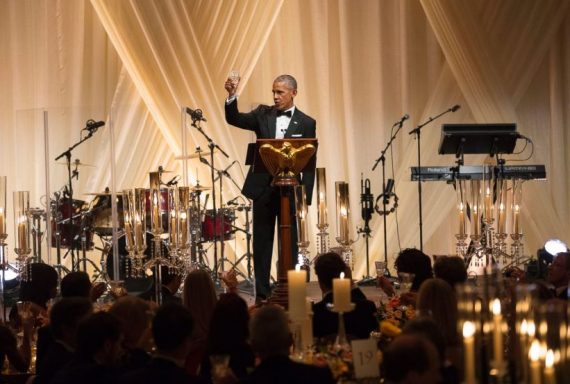 Third: Aelio – Obama raised his arm too much, time to criticize him. Obama offered a toast to everyone. Did he mean it? Did it have a double meaning? Did a toast imply Trump? Such a Social Justice Warrior, oh I mean a loser. The left had forgotten what it was like to hate their president. 8 years do that to people.

al-Ameda – ” … and finally, to those of you who voted for Jill Stein … are you happy, really?”

Franklin – Elvis … has left the building.

C. Clavin – Here’s to the guy who spent 5 years trying like hell to de-legitimize me, and is now crying like a little child because Putin and Comey de-legitimized him.

john430 – Welcome to the Obama Late, Late Show on MSNBC. Let’s hear it for the band. Hey, band? Fellas?

Terry – We had joy, we had fun
We had seasons in the sun
But the wine and the song
Like the seasons have all gone